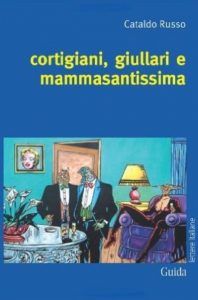 Antonio Schifino, a worker in Italy during the seventies, frozen against his will, wakes up 10 years later in a country that has changed beyond recognition. Going through lethargies, comas and custody in mental institutions, he ultimately reaches our present, essentially unchanged by what he has seen.
The premise is simple but successful and it allows Cataldo Russo to set up an extraordinary satirical novel that goes through many salient moments of our national history. In spite of the desguises used by the author, hiding his characters behind relevant animal features, those who know the history of our country will find clear, obvious connections; those who don’t, will discover alarming analogies with the times in which we are living.
Schifino wakes up just in time to suffer the consequences of Chernobyl damage. He is witness to the birth of Lega Party represented by the most rhetorical and wide-spread prejudices against people from Southern Italy; he is astonished by Francesco Cossiga’s opinions and criticisms; he is incredulous of the events of Tangentopoli and the scandal of Pio Albergo Trivulzio; he takes part in Berlusconi entering the political arena; he is there when ‘calciomania’ (football mania) takes hold and when the phenomenon created by television is mistaken for reality; he follows Democratic Party’s decline and the drifting apart of the left; he participates in the common delirium of cosmetic surgery; and in a very open ending, he goes off in a mythical search of the future.
During the journey there are references to the author’s previous works, especially to the peasant world of I recinti di Don Pietraviva and to social outcasts of Il cielo sopra di me, but the theme is completely different: more moderate, with a relaxed style, caustic and smartly amused. The result is an intelligent novel, funny and absorbing from the first page to the last, always smooth-flowing and enjoyable even for readers unaware of the events the author refers to.
A blast of fresh air in the asphitic world of Italian fiction.