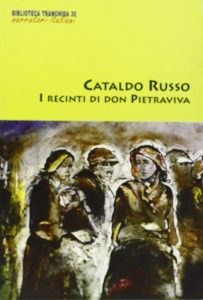 “Don Pietraviva’s fences” is a milestone of Italian fiction, a choral fresco which relates the fate of the poor.  Central to the novel is “Piana del Pantano”, the Marquis Pietraviva’s estate which he keeps expanding at will, in collusion with the authorities, and on which he persuades the inhabitants of the village of Licruco to build their own houses. He is backed by a handful of goons, led by the henchmen Gruppigno and Don Masino, ruthless servants who use threats and explicit warnings in order to please their boss; they are ready to commit acts of violence against both animals and people and to silence any troublesome voice. Sure of their own impunity in a Calabria where homicides can be disguised as suicides, these tyrants pass off as benefactors and the authorities, including law officers, can be bought.

On the other side, three characters stand out amongst the cattle breeders who are forced into a conspiracy of silence by the ever present threat that they may lose everything, including their own lives. They are:  Giovanni Greco, an innocent, former fugitive seeking compensation; the drover Turuzzo Barilaro and his son Tonino who was crippled as a child as a result of an unsuccessful rescue. It is the very fact that Tonino in not able to carry out a “man’s” job, that leads his parents to make him study, thus developing in the boy a keen mind.  By firstly becoming the Marquis’s accountant, then his director and finally the owner of his own hardware store, Tonino achieves a kind of redemption. Justice will not triumph, if not by creating it for yourself.  However, this is not a justicialist novel at all. On the contrary, it is a testament of the extreme desperation in which one can find oneself when the law not only does not apply to everyone, but is also completely disregarded by a scale of values which is always tipped to one side.

With an even, fluent style, Cataldo Russo does not however relinquish poetic, immediate and distinct images. He introduces a merry-go-round of characters who become context themselves, thus facilitating the understanding of the described reality. Every chapter opens with a proverb or a saying in the Calabrian dialect, to which Zì Umbé’s judgments are often linked; a character who acts as a choir and gives a discerning reading of the events to the peasants who consult him.

The historical events of the period are the stage for narration, showing us how the events of a Village are not only those written in books, but are also those intertwined with a cultural context which is not submissive to the Story, but rather a matrix itself of the Story. The power struggles in the Calabria of the 1930s are not different from those that are created today at a national level, where the powerful lavish promises that are impossible to keep and the citizens who, always hoping in the less bad, resign themselves instead to the worst.  Discrimination is the order of the day, even if today it appears in more insidious, but equally pitiless, ways.  Even when it seems that times are changing, power always remains firmly in the same hands and redemption can only come from below. After all, either you follow the laws of accumulation and profit or the laws of life and species.

“Don Pietraviva’s fences” is a modern novel but it is already a classic, both because of the realism with which it is conceived and for its structure. A story that goes back to the roots of injustice and conveys a dense plot of complicities, both desired and endured, and to which the people in Italy, and especially Southern Italy, are unjustly resigned.  A masterpiece which is as exciting as a thriller that should be on everyone’s book shelf, and rightfully included amongst the classics of the twentieth century.