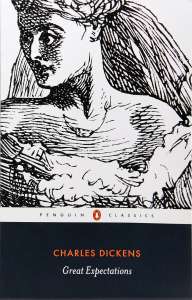 If Charles Dickens were a season, he would be autumn, and if he were a time of the day, he would be twilight. The atmospheres that we find in Great Expectations lead us into a hazy world inhabited by sinister and disturbing characters in which, however, glimmers of light intertwine with darkness.

Philip Pirrip, called Pip, is the main character: we get to know him while, under a leaden sky, he visits the graves of his parents and little brothers and, in the fog, meets a convict who forces him to steal a file from his brother-in-law’s forge, where he lives together with his surly sister, in order to free him.

From this gesture of compassion the whole story of Pip unfolds: we follow him in the house of Miss Havisham, a ghost in a wedding dress, for whom the clocks have stopped and everything has remained crystallized as it was on the eve of her never celebrated wedding; in this treasure box full of secrets and distressing loneliness we play with him and with Estrella, educated by Miss Havisham to break men’s hearts; we experience Pip’s troubles and ambitions, his abandonments and the repentances after his fate gives him a great fortune and the illusion of a wealthy life; we face fear in all its nuances and discover a secret guarded for many years.

Great Expectations was written and published in weekly episodes between 1860 and 1861 in the magazine All the Year Around, a periodical directed by Dickens himself: the title and publishing method reflect the will of the author to generate tension and expectations in the reader for the entire duration of the novel, making him a witness of unforgettable – and masterfully represented – scenes, often with epic humour.

Dickens abandons his canonical protagonists, heroes of a granitic purity (such as David Copperfield and Oliver Twist), to choose a more vulnerable character, stained with vices and the desire of limelight to the detriment of his origins’ sincere affections. The British author proves to be a master, as always, in fathoming the depth of human feelings through polychrome characters, and by gently touching the darkest sides of our nature.

In Great Expectations the scenarios change, but the engines that move the gears of our age do not: the money and the power that guide and corrupt the soul; the class differences; the prejudices towards the poor and outcast; the disappointment of love and revenge; the friendship that persists over time and beyond distances.

A “dark” novel that has dreamy and nightmarish sides, with hints that remind the Chaplinian cinema and that, despite the many theatrical, musical, cinematographic and television adaptations, remains a pearl to be read on paper, before relying on any different form of distribution.