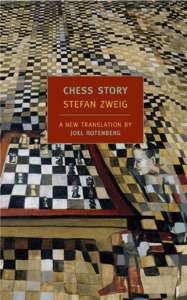 A ship travels through the Atlantic Ocean, from New York to Buenos Aires, a small closed world where some peculiar characters live and, among others, a baseborn great chess champion stands out, “the” reigning chess champion, Mirko Czentovic. Zweig mixes reality and fantasy and puts together the names of real past champions with his fictional ones.

The narrator is a passenger who just plays this (after all secondary) role. Czentovic’s protagonist/antagonist only appears after many pages, giving life to the core of the short story. The match on the chessboard is a narrative metaphor the Author uses to convey the conflict between the Central-Europe civilization and Nazism. The suspense is so high that you can’t stop reading till you reach the last page.
It is important to understand who wrote this short story and when he did it.
Stefan Zweig was a really famous writer in Europe in the 20’s and 30’s. He embodied the spirit of Central Europe. He wrote a lot, especially essays, biographies and research texts. In the 30’s Nazism advanced and violently destroyed everything Zweig believed in. He escaped to England.
In 1942 he went even farther, taking a ship through the ocean (maybe he had the idea of the set from this experience) and escaped with his second wife to Brazil, where he wrote this short story. However he couldn’t overcome the pain caused by losing “his” world, which he had so deeply described and embodied. He and his wife committed suicide.
The story is deepened by these events: it becomes an intense story, even if short, and a symbol of the writer’s life, aspirations, dreams and pains.
Fascism had an antagonist movement, Resistance. Zweig embodies the only known resistance to Nazism, individual heroism. I like to also remember real modern martyrs, as Hans Fallada and Sophie Scholl.
I’d suggest reading the preface after having read the short story. The characters can be contextualized and understood more precisely, but a “blind” reading is more fascinating.