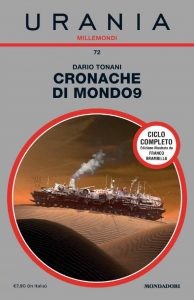 In an inhospitable world where wide deserts alternate with expanses of ice, the sand ships sail. In order to survive these sentient machines cannibalize human beings and gradually turn them into inert metal. With such evocative names as Robredo, Afritania, Coriolano, Bastian, Miserable, Vassago, Yarissa, these titanic molochs on wheels, as big as cities, dominate the planet. The only threats able to stop them seem to be rust and enemy ships. Human beings can only try to survive the toxic sands, the machines, the disease which turns flesh into brass, and the “mechardionici” called “heart-snatchers”, which are neither entirely human nor entirely mechanical.
Written in a refined and captivating language, Chronicles of World9 are stories of apocalyptic cruelty, in which characters come back unexpectedly but are bound to lose. Even if they escape death, they have to survive in a fear-dominated and loveless world: a remote alien planet, the metaphor for some not-so-distant future. Nonetheless, the author has deep confidence in writing: almost all characters keep a diary in which they narrate their own resistance.
A saga which James G. Ballard would have liked and which could be made into a movie by director Shynia Tsukamoto
The plot is stirring thanks to the appealing descriptions and to a hand full of characters to whom we readers entrust the last vestiges of humanity, siding with them as far as hope will allow; and despair in the face of an inhuman enemy, devoid of any compassion.
With this work Dario Tonani proves to be a very original voice in the realm of science-fiction – and not just Italian science-fiction – and of prose, in general. This suggests that science-fiction is a maximalist genre which cannot be easily labeled.