Home Reviews Look out for the book Claire-Louise Bennett – Pond 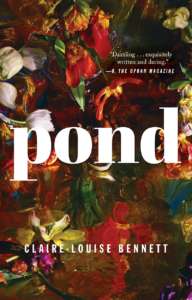 Pond is an experimental novel that takes place entirely inside the mind of an unnamed protagonist. It relates the thought processes and intensely focused observations of an elusive, dissociated woman. Her language is fresh, and yet often completely ordinary, repetitive and seemingly trivial too. (Imagine some staid and pedantic neighbour garrulously rambling on about broken knobs on her cooker, Sheaffer pens, or a tube of tomato paste.) The repetitions, however, are cleverly patterned, in such a sustained way that the reader gradually realises that this is not just a domestic narrative but pure prose poetry, with the intensity of Elizabeth Smart’s By Grand Central Station, I Sat Down and Wept.

Only gradually does the reader discover the reason for her actions:

I had the idea about opening the window wide, which I did with no difficulty, despite the rigid appearance of the clasp … and then, from there, it was possible, unavoidable really, to listen to the storm going around and around, and I knew it was an old one that had come back.

See? That strangeness. You have to keep reading. “Thoughts such as these lurched and abated through several afternoons,” she tells us. And we lurch and abate with her. She gets an image in her mind of someone sitting on her ottoman. So she decides to have a party, and speculates how she will get this person to sit on the ottoman. The party takes place precisely to enable this fantasy to occur. Yet nothing is overtly stated. You have to follow her deliberately obtuse thoughts and divine her real intentions or subconscious attempts to hide significant facts. She is very intelligent and uncannily aware, wanting both to divulge and to hide. If you like riddles, this is your book. Her reflections are captivating. She uses unexpected adjective combinations (“prescient and steadfast”, “turbulent and extrinsic”) and verb pairings (“tumbled and prospered”), a didactic tone full of interesting statements and aphorisms (“the ivy always knows where the chaos is”), an old-fashioned (think Austen) formal register, and often (seemingly unintentional) humour.

The Latinate register occasionally shifts, all of a sudden, into crude language, an indication that her intensely controlled personality has slipped, to reveal a volatile, possibly schizophrenic, aspect to her nature, which is usually repressed for reasons that remain mysterious. Occasionally she veers into the lyrical: “bright flowers that extended, like dancers on tiptoe”. Or later, “the wine, you see, had gone gallivanting through my blood”. The unpredictability of the language is what makes this such a delicious read, as well as that confiding tone: “if you must know”, “I will admit”, “I’m quite certain”. The sensation throughout is that the reader is a confidante, or it’s an internal conversation she’s having with herself.

Objects (like a banana) are slipped randomly into the narrative, and then, many pages later, reappear. Nothing here is accidental and yet everything feels incongruous. While considering death, she stands on one leg, clipping toenails into a basin. She turns pessimism into an asset: “I have never had any difficulty in foreseeing impending setbacks.” She is profoundly secretive – in fact, she tells us so – and also contradictory. If she is as perambulatory in her thinking as Leopold Bloom, she’s also both more deluded and more self-aware. Like him, she does the strangest things: “I would listen to a small beetle skirting the hairline across my forehead”; “I put two sugars and milk into my coffee because that’s how the ratcatcher takes his.” The reader feels a compulsion to psychoanalyse her and then is wrong-footed when the protagonist intuits this impulse. And just when the reader starts feeling that everything in the book is a metaphor, the unnamed speaker pre-empts that thought, too.

She is of indeterminate age, and appears to live alone. Subtle details suggest unmentioned aspects about her complex, sensually repressed personality, and revelations about her real internal state come obliquely, via other topics: “in every exuberant joy there is an undercurrent of terror, or else a wistful lament over an unrecoverable loss”.

She talks about a book she has read:

This is very much a book about survival and the grievous psychological ramifications and gruelling exigencies occasioned by confinement … the profound existential and cosmological repercussions precipitated by such extraordinary isolation are also beautifully charted and it is quite impossible to stop reading because in a sense you want to go where she is going.

One can’t help feeling that the protagonist has effectively encapsulated her own story.

The entire book is a labyrinth and Pond would warrant serious academic analysis to prise out these tantalising clues and motifs. She is a fascinating study. You can’t get her out of your mind. And you are none the wiser about her or her dark secret – though you may have an idea – when you reluctantly reach the last page.

This review was first published in the Dublin Review of Books.

Afric McGlinchey’s second collection, Ghost of the Fisher Cat (Salmon Poetry), has been nominated for the Forward Prize for Best Collection.