Home Reviews Look out for the book Alberto Cotti – D’artagnan the Partisan. A fight for freedom through the... 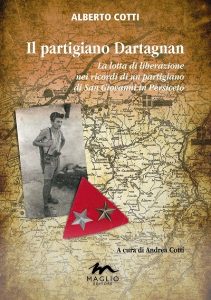 Alberto Cotti tells his story as a partisan without adding rhetorical trappings to his harsh experience in those difficult years. The fight for freedom bears the memory of his companions’ horrific death, the unbearable fatigue of long journeys, the machine guns’ shooting, fear and hunger.
Most people’s mood and honesty were in tatters, as if bombs had destroyed even their spirit. “The memories follow in chronological order, but without inspirational passages. Even his choice of mentioning the Resistance occurs abruptly. The description is dry, free of rhetoric and concise:
“Following the experiences I had at Porta S. Paolo, I made the decision of working  against the Nazi invaders and criminals.” This represents  a poor choice for a novel that could have involved the reader passionately, thus revealing, at times, weak narrative techniques. In fact, the author tends to be rather sparing with details  and feelings.
After contributing to the creation of a S.A.P. (Patriotic Action Squad) –  at via Permuta, in August 1944, “with little money and a password in mind”, even  partisan D’artagnan, alias Alberto Cotti, decides to leave his native country to face “the terrible life of the rebel”. The memories of the battalions and brigades, his companions’ heroic deeds, are told in a simple and direct way. The speed with which they recount the memories of war is sometimes hampered by observations of facts too often implied in the books on the Resistance: “In all these essays there is a gap or an oversight which concern the young people who, beyond the political ideologies and influences of political parties, formed a united anti-Nazi and anti-fascist front, simply called the Youth Front”. All the characters described (Scagliarini, Serrazanetti, said Tito, Zanetti) are in fact twenty years olds  who rebel against Fascist Italy and its rules, instilled from primary school onwards. The yearning for freedom overcomes the fear of the enemy and death: “Come with me […] I am going to the mountains with the rebels if I have to die at least it will be with a machine gun in my hand.”