Home Reviews Look out for the book Davide Verazzani – The last Beatle. Neil Aspinall, behind the scenes of... 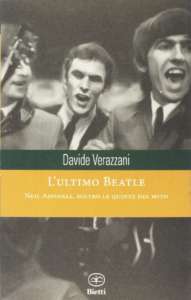 We were born not only for ourselves, but for the rest of the world

Neil Aspinall was Paul McCartney’s classmate at the Liverpool Institute, which was also attended by George Harrison. Soon he met John Lennon, who studied near them at the Liverpool College of Art, hence the four boys began to hang out. As if on purpose,  Neil became Mona Show’s lover, who, not only was the mother of the first Beatles’ drummer Pete Best, but also the founder of Casbah Coffee Club. That is where the Quarrymen, back then with members John, Paul, George together with Ken Brown, used to successfully perform  and play their ‘skiffle’ every saturday night.  A clerk during the week, Neil became a Casbah regular at weekends where he became Pete’s best friend and helped Mona managing the club. Even though him and John did not get on immediately, their understanding shortly became the most solid because of their similar personalities. Neil was with them when, together with Ringo Starr, the boys became The Beatles. He became their handyman, driving their van and their instruments around England. He was the first one who fully believed in them and in the band’s potential deciding, as a consequence, to resign from his job to dedicate himself to the Beatles 24/7. Neil was a committed employee, a devoted friend and a faithful fellow who always had the “Fab Four”s back: while the band was in charge of the music, he was taking care of everything else. In a short period of time, thanks to his brilliant mind and priceless determination, Neil, together with Brian Epstein, became the band’s manager attending almost every recording session and later being appointed CEO of Apple, their own record label. After the band’s dissolution he decided to keep looking after their business interests and their public image and even started proceedings against Steve Jobs’ Apple. Finally, Aspinall produced and realized the documentary “The Beatles Anthology” and the three namesake collections; Neil also became the executive producer of  “Love”, a project realized by The Cirque du Soleil that tells the story of The Beatles.

Davide Verazzani, screenwriter, actor and playwright, perfectly knows how to use the material collected during his long and accurate research , in addition to the conversations with some genuine witnesses. As a matter of fact, he managed to  interview  Susan Aspinall, Neil’s widow, Peter Brian, who was Brian Epstein and  Beatles’ assistant, a promoter friend of Epstein called Joe Flannery and, in the end, Mark Lewisohm, the greatest living biographer of the Liverpool band. After all, Verazzani had already written the monologue “La versione di Neil”, whose English version called “A life with the Beatles” was performed in sixteen theatres between Scotland and Great Britain and at the Edinburgh’s Fringe Festival in august 2015. Moreover, he had also written the staged reading “Revolver” celebrating the Beatles’ record’s fiftieth anniversary, which was played in Rome, Milan and Brescia in 2016. In addition, during his search for the Liverpool contacts Davide was helped by two important spokespersons of Beatlesiani Associati d’Italia, Rolando and Alice Giambelli. Although, it was only thanks to his undeniable talent that the author from Milan shows Neil Aspinall’s life in an autobiography that seems rather like a novel, written with the passion of an authentic fan, the accuracy of an expert and the fluency of a skillful narrator. The outcome is the fascinating portrait of a time period in which Verazzani manages to get the reader totally immersed in the narrative from the very first page.