Home Reviews Look out for the book Émile Zola – L’Assommoir 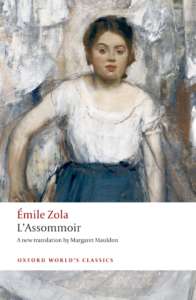 Our future is our past

Assommoir: watering hole, or, in this case, butchery. This is what Colombe’s inn was called. And we can easily understand what kind of watering hole it is, and where the alcoholism leads to.  Actually, we experience it, because Zola brings us so close to the characters that it almost feels like we are in their shoes.
It seems like we lived next to them. Or, if we keep some distance, it feels like being their neighbour. Briefly , it’s like knowing them very well.
Colombe’s inn is nothing more than a hell circle where poor, workers and disowned people keep trying to disappear, trying to find an impossible peace.
Mowed down by injustice, egoism and slander those people are dragged into alcoholism from another butchery: the one of social inequality, that, even today, discriminates and disheartens us. We all live in a butchery, where the fall of a neighbour is a conquest, at least for the evil joy of taking part in his failure. Mors tua vita mea.

In Zola’s novel there is no social cohesion, because that bond is just appearance, a substrate that masks egoism, individualism, hypocrisy, opportunism, smallness, meanness, foolishness, gossip (even the grossest), sordid malice, envy, resentment.
A sharp and ruthless people’s portrait, L’Assommoir tells the story of the rise and fall of the washerwoman Gervaise, in which her men (Lantier e Coupeau) play an important role together with her hateful brothers-in-law Lorilleux and her daughter Nanà. She is also the protagonist of another work by Zola, a particular female character, who Cain developed, like other writers, in his novel Mildred.

L’Assommoir shows us the depression (once called pain of living) which the main character is drowning in and allows herself to drown in.
Through Gervaise’s destiny, Zola tells us about the people’s fate, the fate of those who are forced to live in such a scary, hell on earth that annihilation and death would be a better choice. For this reason, he lets the most opportunist and dishonest of the characters give class struggle speeches: powerful words that never come true.

A masterpiece, if one has ever existed, that sheds some light on society’s plagues, a society that carries its own burden and which is defeated by social oppression.
An extraordinary experience all of us should have: to get a new lease on life, with the danger of being knocked out. Things would have to change in order to remain the same.
And we realize it examines our miserable present with the mirror of our past.

Translation by Elena Cammarata and Giulia Pasinelli; edited by Jenovia Amisti Smith.
Elena Cammarata and Giulia Pasinelli are students of the Linguistic Sciences and Foreign Letters faculty at the Catholic University of the Sacred Heart in Brescia, Italy; they collaborate with Inkroci in the translation project coordinated by Professor Jenovia Amisti Smith.