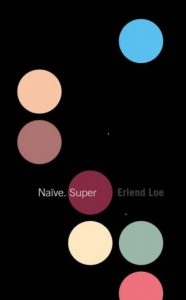 Identity crisis. These three words summarize the condition of a 25-year-old boy, the main character of this enlightening, although short, novel.

Out of the blue (for the reader too, since from the very first page we read,”My life has been strange lately. It came to a point where I lost interest for everything”), this Norwegian boy derails from the railways of a life which could be defined, maybe with slight presumption , “normal”.
The boy is a victim of his own perceptions, he feels them just in the moment they arise, feels them erupting, and does not understand. With a psychiatric-textbook-like awareness, he discerns that triggering events are not particularly relevant and marvels at that, showing flashes of awareness, typical as those in transition from childhood into adolescence.
In fact, during the crisis, psychic ages constantly blur within the protagonist, and wise and sharp observations sometimes drill through his merely childhood basis; and these examinations seem to be crazy, but at the same time they are surprisingly rational.

So, during a croquet match with his brother (a scene that tacitly contains a muddle of family considerations made with a sense of helplessness, competitiveness and unsuitableness, all these feelings with all the frustration that only a childhood psyche, or a very frail one, could perceive), the main character feels the crisis right in the moment of its origin.
And here the style majestically supports the event.
Naïf is not just the title. All is naïf.
But not only is the style naïf, even the structure itself it is, the whole narrative composition which let us immerse into the psychic drift in which the protagonist sank. And the protagonist has no name, but dominates the story with an all-absorbing first person that recalls a Freudian childhood megalomania.
Hence, naïf becomes a narrative tool: a key of knowledge, especially when the main character reflect upon himself and the ongoing crisis.
And gradually the protagonist seems to find a long lost peace of mind, acting  on the edge of mania: we can see him obsessively bouncing a ball against a wall, and compulsively hammering some nails onto a toy work bench.
But we also see him learning to open up, and finding communicative ways with several characters. Regarding to that, however, we should point out that his conversations has a kind of potential justification that definitely diminish the significance. As an example let’s take the exchange fax messages with his friend Kim: they are apparently crazy conversation, without a constant logic direction, justified from Kim’s perspective by the fact that he lives alone on an island.
The clearest justification, though, is the one regarding his connection with Børre, who is in fact a little child attending kindergarten.
This method, which is partly needed to find a convenient escape from the fact that the protagonist is basically a crazy person (although nobody seems to notice), fits very well to the decision to use the first person we talked about earlier: always keeping the main character’s viewpoint, does not allow us to really know the reaction of the people he is dealing with. He could lie, or still provide a distorted – and consequently biased – point of view.
The crisis seems to drastically decrease during the trip to New York to visit his brother’s, who we guess is very worried and wants hard to help his brother.
The last page is emblematic, here we are struck by the complete closure of an exchange with professor Paul Davies, whom the protagonist read a book and got deeply scarred by theory of relativity with its consequent dissolving of concept of time. Here the signals of communicative compromise between the protagonist’s world and the external one, are sharply broken off by a non-answer.
Interpretations about that can be many, and probably this is left to the reader on purpose: he has the task of facing the lack of an answer in which the main character hoped that much.

Erlend Loe, born in Trondheim in 1969, is a Norwegian writer, scriptwriter, journalist and translator. He claims the right of writing as a game, even when he uses darker and satirical tone when analyzes modern Norwegian society. Naif.Super, translated into 15 languages around the world, is with no doubts his most famous work.