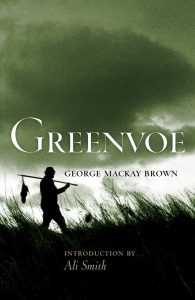 What is the difference between community and society? As individuals, we recognize that we are part of a society, but every time we reflect on the loss and the distortion in our contemporary system of values, we evoke the primary ethical needs of the community, such as solidarity, acceptance of differences, membership and recognition of identity.
With “Greenvoe”, George Mackay Brown gives us a harsh and extraordinary reflection on these themes, immersing us in the life and the fate of the inhabitants of Hellya, a small island in the Orkneys.Five days, one per chapter, in which simple daily life flows along and reveals itself, in harmony with nature and the sea, and with a rugged and wild promontory. All members of the community are represented: fishermen’s families, struggling to earn a crust, while having to deal with theft of their lobsters, sea rescues, and the dutiful payment of their debts; farmers, who know and defend the land, secret keepers of the harvest cycle, the archetype of life, death and resurrection.

There is the misogynistic and wild ferryman, suspended like his own being between the sea and the coast, in defense of a freedom that he feels cannot be moored; there are cunning and cruel children, one minute weighing up their power in the struggle between the strong and the weak, and the next vulnerable and ashamed in the face of a conscience that instinctively imposes itself when they run off after their misdeeds. There is memory in the writer’s stories, when he notes with genuine passion the myths of the origin of Hellya and sings them to the customers of the Scorradale inn, between one pint of beer and the next, bound by liquid ties, like blood. There is Timmy, the madman, who collects fragments of life among the ravines of the island.
Then there is the old landlord, the Laird, a recognized but no longer endured feudal reminiscence; there is the religion tinged with humanity of the drunkard Reverend and of his mother, struggling with the assessment of her own life. There is a matriarchal femininity in the wives, mothers and sisters who care about and protect everyday life on the island; there is a fading femininity in the spinster teacher who cannot adjust her desire to the passage of time and there is the explosive and sensual femininity of the young laird’s granddaughter; there is the femininity that gives life in the comfortable and absolved arms of Alice, wonder mother. There is the soul of commerce in the emporium of the Evies, she petty and gossipy, he with the Judas’ kiss ready on his lips, and there are two foreigners, the one participating heart and soul in the community, the other only a dark and alien shadow, from the outset born to be the enemy.
Hellya meets its destiny in the sixth chapter. The island community is forced by a foreign shadow to assume the status of a society, it is dug up, spoiled, cheated and robbed. It is chased away. The rhythm of daily life is no longer dictated by nature, because life itself has been killed.
But the secrets of the crop cycle have been preserved, and it is Hellya itself who still gives us the last phase of the rite: rebirth. In fact, it is not a coincidence that the author, who as an adult had converted to Catholicism, chose to organize this workw3 into six chapters: in the Bible, God takes seven days to create the world because the seventh day is dedicated to rest and joyful contemplation of the finished work. The fate of Hellya is not fulfilled, nor is the fate of humanity.