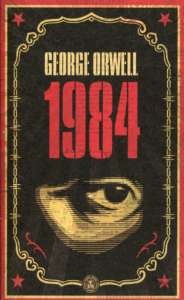 Nineteen Eighty-Four tells of a future world in which the earth is divided into similar Hyperstates in perpetual war with each other. The protagonist Winston Smith, just as anonymous as the name he bears, is the spectator of the tragic devastation of his time.

London became the capital of Oceania, a cluster of countries where society is governed and ruled in every aspect by the principles of Ingsoc, the new English Socialism. Its leader is Big Brother, a mysterious identity always balanced between the mythical and the unreal, who oversees and directs every moment of his citizens’ life through the pervasive use of cameras and microphones, present in all places lived in by human beings.

Every look, breath or emotion is observed and scrutinized in a fanatical search for possible dissent or desire for treason.

The food, the clothes, the houses are the same for all, in a miserable and intrusive conformity, according to which there are no written laws but everything is forbidden, especially desire, thought and feelings, apart from the positive ones towards Big Brother.

It will be love, unexpected discovery, opposed and rejected by society, what brings the protagonist to a reaction, driven by a feeling that goes beyond the laws and memory.

Unfortunately, Winston, the last man left who tries to understand what lies behind the barbarity of the world they all know, doubting and rebelling, has an incomplete identity as well, with no memory of the past and no possible comparisons with it. Through his rebellion we become witnesses of the insinuating and at the same time sordid and brutal violence of totalitarianism, and of the power that wants to perpetuate itself, stepping along with Winston, on an incredible journey, all the recesses of the system, its ambiguity and hypocrisy, and its naked horror.

Even at a first glance the novel impresses the reader with its fast-paced and engaging rhythm, and the modernity and relevance of the theme.

Orwell’s prophetic vision is able to anticipate the world we live in today, and raises the question of a possible parallelism between the universe of the novel and the one we inhabit today, with the self-destructive dynamics that contemporary society generates within itself.

One example is the monstrosity of Newspeak, a language developed and reformed in order to better adapt to the needs of the society of the future. According to its principles, any thoughts contrary to the dictates of Ingsoc is not even expressible or conceivable.

It is the paradox of a visionary who pioneered the language of the mass media, of marketing and SMS, where love no longer has power of artistic fecundity, but only manages to wrap itself in sterile acronyms or abbreviations which castrate word together with thought.

A novel about the totalitarianisms of everyday life, those we live and suffer through, even unknowingly, Nineteen Eighty-Four is a warning that helps to reflect on the present and to fear the loss of human and cultural depth, as we are more and more passive or obliging victims.