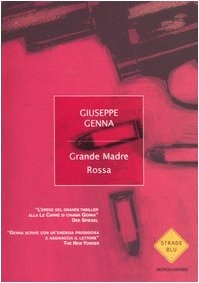 Guido Lopez, an interim detective at the Milan central police department, is playing tennis with a stranger. Immediately after, a huge explosion shakes his city, Milan. The Palace of Justice has been blown up with a propellant so powerful to pulverized it. And the marble dust will linger on the city for a long time, intoxicating it with the rubble of a toxic substance that already represented the Italian justice system.

Thus begins, with a roar, the fourth and last Genna’s novel starring Guido Lopez (after “Tar”, “In the name of Ishmael” and “Do not touch the skin of the dragon”). It continues with an investigation on the cutting edge and counting the minutes to chase the attack’s leads. It’s easy to jump to the conclusion that is the Islamists, but it would be too obvious. Actually Lopez, trying to recover the Court’s Filing, an archive containing some of the most secret documents of the past and present Italian history, discovers of murky clues that lead him to assess a threat of a much greater magnitude: Big Red Mother, a European – or maybe just Italian – subversive plan, which aims to destabilize the Western world as we know it and that acts in the name of Ulrike Meinhof.

With an erudite but very effective style, and with an unusual smoothness, Genna manages to get us into the investigation as much as into to the subversive plan, with opponents that continuously graze each other without being able to have a direct confrontation: on one hand we have the terrorists, with their extremist ideals and nihilistic ideology, on the other the machinery of a long-winded and tired State, corrupt to the verge of collapse, and especially represented by Guido Lopez “in transition”, a power’s servant with countless unanswered questions, but who lacks the time to think. Genna here shows a rare skill, laying the groundwork for the following novels, in particular “Dies Irae” (perhaps his best book) and “Italian De Profundis”, sinking the blade into the theatre of strolling players represented by the Italian government, unable to deal with the situation and to stop the Big Red Mother’s lethal action. But, ‘everything must change so that nothing changes’, and Italy’s response is passive, temporizer of the last thirty years, resigned and accustomed to the worst, not ready to respond to any push for a change.

A bitter and sharp novel, exciting all the same: a work of intelligent entertainment that never gives up to indulgence or business needs, but that can render, with surprising clarity, the character of a nation in a 100 % fictional work. A must-have for those who still want to think and seek, in reading, something more than a mild anaesthetic to kill time.