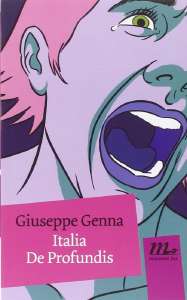 In a book more autobiographical than usual, Giuseppe Genna scrutinizes himself to investigate Italy. He writes a “de profundis” dug into his own flesh, that of an author who is an Italian product and therefore a symbol of Italy as a whole. He ruthlessly exposes himself in a novel programmatically anti-narrative, where the writer and the nation are both courting and avoiding one another, and eventually overlapping. This is particularly true in the second and last part, where the experience of a stay in a resort becomes the emblem of a country that has turned into a holiday village: a village that “has exploded, the nation has exploded, the social glue has dissolved as tempera in the sea”, a metaphor of the immanent Italian tragedy, that of a drama which takes place outside the sphere of our consciousness and therefore is ignored, even though it is already ongoing, in fact, already done. It is the fall of the word, of the image, the inability to start something not already homologated, to dialogue out of a showbiz-life immersed in an eternal present, unable not only to look at itself, but also to conceive death, i.e. the meaning, other than something faraway from itself.

A novel impossible to tell, written in an overflowing, sometimes stubborn style, proud and disdainful, by an author who calls himself “explicit asshole” and who chops ratings about everything and everyone, starting from himself, in a self- pleased but not exculpatory critics, denying a rather obvious snobbishness.

At the end of an exhausting 345-page-long marathon, the reader, ably bewildered, finds himself, the misery of his own “Italianness”, the barbarity shared with both those he feels close and those he feels distant from himself. In the effort not to categorize himself with it, he is forced to surrender and identify himself not with the narrator-protagonist Giuseppe Genna, but with the tragedy of being Italian. Thus the intellectual who despises intellectuals, demystifies the Italian legend made of schizophrenic optimism and unrealistic reassurance all leading towards an identical and common calamity: the inanity of a “de profundis” gone but not left behind, rather transformed into a bleak present shared by us all, unconscious but not innocent ghosts. As concluded in the “Song of May” translated by Fabrizio De André, “though you believe yourselves acquitted, you are forever involved”.