Home Reviews Look out for the book Italo Bonera and Paolo Frusca – Heaven and Iron. The future has... 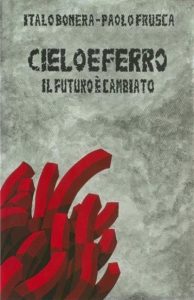 Look at the future and reflect on our present

Italo Bonera and Paolo Frusca unmask a fictitious future and its direct consequences through nine short stories, individually written but strictly interconnected; they are about a future dominated by the contrast between the avrahamiti (the followers of Avraham) and Free Town Coordination (what is left of the West, as we call it now). Avraham, a novel Abraham, imposes a reductionist view of the world that simplifies the complexity of reality by drawing a clear distinction between the absolute categories of Good and Evil; a vision that is able to bring together the fundamentalists of the three major monotheistic religions, “the worst of all faiths” in one faith and under one banner, to form an army determined to destroy by any means everything that is not conforming to the thought of the new patriarch.

On this background interwines the main characters’ vicissitudes described by stories individually and independently written but closely linked together (so much that some of them appear more than once, and there are references to the novel “I’m not like you” written by Italo Bonera himself), all marked by the disillusionment and concern distinguishing the authors. A dystopia that ends with no winners or losers, since it’s the whole of humanity to be defeated under a sky which is not a boundless metaphor of hope, but ferrous hood without horizon. In the short story “My name is not Quinto”, the authors seem to suggest that a possible liberation from opposing sides cannot be bloodless because reaction to the atrocities of a divergent world, solutions can be only be two: to kill or be killed.
“The future has changed,” is the subtitle of this novel written in the form of an anthology and able to materialize a nightmare in which we are already immersed: seventy years after the end of World War II we may face a new global war, in which fronts will not be well defined and the fight will be relentless but with no future.
A well-written book that can be quickly read and willingly reread, one of those works that revaluate science fiction and project us into a possible tomorrow, because it is only an extrapolation of our present.