Home Reviews Look out for the book Heiko H. Caimi – The Predestined Ones 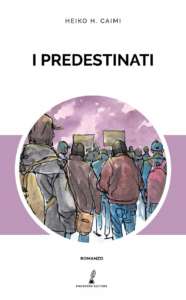 Against the backdrop of a labour strike, there are twelve interwoven destinies; twelve characters who will be part of an unexpected sequence of events. The author Heiko H. Caimi tells a story which is able to show the power of the worker’s movement in today’s world, a context where news are rapidly spread through mass media. With the help of a subtle, psychological game, the workers’ dreams, hopes and disillusionments are cleverly, and, unconsciously for them, turned into bombs ready to explode. Tension increases and the factory suddenly becomes a battlefield where the participants’ roles are not clear anymore: on the one hand there are the workmen, on the other we find the top managers backed by the police. Who is the oppressor and who is the victim? The only certain thing is that nothing is as it appears and that the answer is in the bloodshed. This tragically leads to show stopping media event which has never been portrayed before within the Italian scenario.
Heiko H. Caimi’s “The Predestined Ones” describes an intense, and absolutely realistic, episode of violence and struggle. Through a no-filter, direct writing style, he is capable of investigating the characters’ personalities, giving us the opportunity to develop conflicting emotions towards them. Sometimes it evokes empathy and compassion, other times aversion and disdain are the feelings evoked; it is surely difficult to remain unmoved by the thrilling and psychological plot of the novel. The difference between “The Predestined Ones” and other literary works is the apparently anachronistic choice of the subject: the workers’ movement. It was a frequent topic of discussion in the past, especially in our country, which is now reconsidered by the author from a contemporary perspective, through an alert, strict, almost ruthless, critical analysis of the Italian social and political context. It is definitely a novel of social condemnation told by the writer through the rhythm of a thriller.