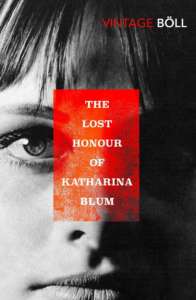 “Calumny is a little breeze”: that is what Dr. Bartolo sings in the opera “The Barber of Seville”, Gioacchino Rossini’s most famous work, well aware that it makes its way into people’s ears and there it stays.

We know from the start that Katharina Blum is a murderer: she shows up to Moeding, the police inspector, to turn herself in. This happens in the third chapter, which starts on  page 5 and finishes on  the next one. The technique that Boll used in this short novel is peculiar: 58 chapters in just 136 pages, an average I believe is a record. But each chapter is fundamental: each of them represents a scene and gives essential information.

In this  text, written in 1974, the Nobel prize tells us, based  on true events, how bad a journalist can become to sell copies of the newspaper he works for. Indeed, Katharina is an exemplary person: she is smart, she has always paid every penny of her taxes,, and works impeccably as a housekeeper. However Katharina is suspected of being Ludwig’s lover, a man, who has been wanted by the police for a long time, and Totges – the journalist – does all he can to make her look like an evil woman to the general public: he interviews  the woman’s mother and twists her answers around; he redeems her troublesome ex-husband, who gets his revenge on his wife by defaming her; he discredits her employers and everyone close to her.  It   does not matter that things are gradually denied and that the protagonist’s name is cleared: her honour is  stained  and so will it  be forever.

In “The lost honour of Katharina Blum” there is  remarkable newness and depth: just think of the false information, the so-called “fake news”. Judging makes us feel better, it makes us resize our sins and mistakes, it puts us on a pedestal that seems to raise our ethics above  that of  the others’. It makes us feel immortal like Dorian Grey, while our painting grows old in the attic. Until, someday, someone will do the same to us.

In his tragedy “The storm” Strindberg tells us a great truth about the human soul: “A word that has flown away cannot be retrieved anymore”. And this is what happens to Katharina in Boll’s novel as well as to a lot of other people in the novel of life. The protagonist’s final remark is distressing: “After all, how do people know they are all lies?”.

Student of the Linguistic Sciences and Foreign Letters faculty at the Catholic University of the Sacred Heart in Brescia, Italy, he collaborates with Inkroci in the translation project coordinated by Professor Jenovia Amisti Smith and is project manager of a group of students.

Jenovia Amisti Smith, Professor at the Faculty of Linguistic Sciences and Foreign Letters at the Catholic University of the Sacred Heart, Brescia, coordinates the University translation project for Inkroci.