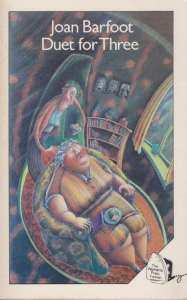 Aggie, June and Francis are respectively grandmother, mother and grand-daughter: three women who are deeply different, attached by a strong love, a sense of duty and silent contrasts.
One morning, Aggie wakes up in a wet bed; it’s the end of her independence, the beginning of a frailness that will make her fearful both of her daughter’s decisions and of her granddaughter’s discovery of her inadequacy. Her body, by that time obese, already made her, a person who relies on others, in need of help for the easiest daily actions such as getting out of bed and get dressed; now this new degrading secret ties her even more to her daughter June and to her ill-concealed purpose of sending her to an old-people’s home.
June is harsh and strict, she seems to carry out her tasks without feelings, exhausted by duty and longing only for a freedom that, anyway, she has never been able to seize. Both are waiting for the granddaughter’s arrival; the girl appears from time to time, between one trip and another, in the little time left free from her several work and personal engagements.
Both Aggie and June reassess their life as nothing has been easy for the two women: they have not been spared by deceptions and abandonment, lack of understanding and bitterness. Nevertheless, beyond appearances, not only is their bond based on interdependences but also on a deep love that will eventually show with few gestures and glances, in front of a trunk full of objects which they find in the attic.

Joan Barfoot has the gift of touching delicate and painful subjects with an almost technical accuracy, but without lacking a great ability in studying human soul. Her style is dry and emotional at the same time, without falling into sentimentalism even in the novel’s deepest moments. The two main characters always keep profound dignity and a mutual respect, even when their differences would push them to fall into the abyss that separates them.
The author shows us, very truthfully, how two people can misunderstand each other by giving to the events of their life interpretations mangled by memory and time. The situation that the two women live is part of those both personal and universal stories that often happen in many families. The author succeeds in making the characters psychologically close to us, as if we were friends; by taking part to their life, we too, just like Aggie, would like June to be more relaxed and happier. We would also like Aggie, to be able to give a different direction to her existence, despite being a woman of great vitality. Joan Barfoot, however, seems to tell us that life is like that: useless to mourn over giving us the opportunity to be close to each other and to feel deep emotions for one another. A sharp and unforgettable novel.