Home Reviews Look out for the book Steve Tesich – Karoo 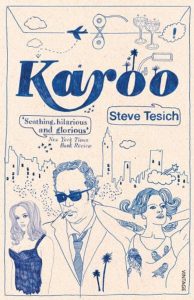 The American dream has a comically dark side, which Oscar-worthy screenwriter Steve Tesich reveals through the disillusioned eyes of the protagonist. Saul Karoo made his fortune as a script doctor, rewriting screenplays, fixing weak plots and sometimes adapting few authentic masterpieces to suit the general public’s cheap tastes. In other words, he’s almost a contract killer and surely a bastard, who is fully conscious and very proud of this.
We meet him in New York, at a small social event, where he is busy playing the part of a louse or a drunk, or both, like a modern court fool who is allowed to do anything. But oddly enough, alcohol, a necessary ingredient in the overseas sociability, does not have any effect on Karoo anymore; or at least that is what he claims.
One of the novel’s leitmotivs, which we find repeated in infinite and most enjoyable variations, is connected with the idea of acting in a performance in front of an audience, staging one’s own (duly edited) private business: the world is a stage, all the more for somebody who works in the show business. “I play, therefore I am” could be the protagonist’s motto. Everything must take place in public and for the public, even if it is just the nosy diners sitting next to him at a restaurant.
Karoo talks in first person, but has an external perception of himself, like one of the characters from his film scripts. He plays trying to be at his best or, more often, at his worst. After all, he’s busy attempting to cut his losses and save the screenplay of his life. He does not believe at all in the success of the endeavour, until…
The action moves to Los Angeles. Here the protagonist decides to chase a happy ending, to give in to the last illusion of being alive, to believe that his love for a woman can still rally him. And not just any woman: Leila, waitress and aspiring actress, is, most of all, the biological mother of the child that Karoo had adopted 20 years earlier. While waiting for the right moment to tell her the truth, he makes her the protagonist of the film he should “fix” by restoring all the previously cut sequences where she made an appearance. For her, Karoo invents a different story, advancing all the necessary justifications, and he finally loses himself in the pursuit of a happy ending.
Tesich tears the myth of Hollywood to pieces with great skill. This book is a very rich dish and its ingredients are cooked with an unparalleled style: we have a critique of America, the star system and the intelligentsia, a sui generis Oedipal triangle, an impossible divorce, a tormented father-son relationship, a cynical destiny; we can find comedy and tragedy, the challenge of Odysseus’s journey, a man in its entirety. It may be quite hard to process, but this book will give the reader hours of pleasure. If you loved Barney, you will love Karoo too. Perhaps a bit more.