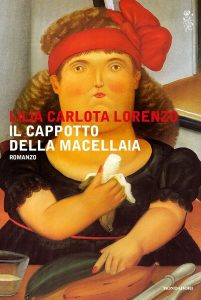 Lilia Carlota Lorenzo offers us an expertly crafted work, starting from the very cover which is, frankly speaking, unsettling. But who cares about the cover if the product – which is reasonably-priced – is digital? Today’s poor and precarious publishing industry is subject to online posts and comments. It is the word of mouth of the digital era, and we should maybe get used to it.

The She-Butcher’s Coat is a unique crime fiction novel, a noir story with a very bitter sense of humour. The facts are established in the prologue: ‘on the dawn of Thursday 7 October 1943, a man was killed in an isolated village in the Argentinian pampas. The truth was never discovered: dead people do not talk, murderers do not accuse themselves, and the only witness did not talk because he was the real culprit’. Here are the facts, condensed in a few words, and expressed in a rather ‘exotic’ language, which is one of the main features of the novel (note the specific indication of ‘Thursday’).
From then on, however, the facts get lost in the prairie so that they are quickly forgotten, whereas the protagonists emerge with their darkest stories, thoughts, rivalries, vices. They are horrible and often grotesque characters, but they are full of humanity and deserving of pietas, sometimes sympathy, each in their own way. They are gossipy, cruel, nosey, envious, swindlers, libidinous, greedy, hot-tempered, fearful, overcome by life and by their peers. Homo homini lupus: the little village of Palo Santo is a real circle of Hell.
What is the mystery behind the depraved and unmentionable actions? Each character gives us their personal perspective on the story. But what story, in the end? We wait for a murder that never arrives, we ask ourselves what the butcher’s wife is doing commissioning a new coat for her daughter. Are they related? The girl however gets fatter and fatter, the coat is never her size and then we find out that – as usual – nothing is how it seems. We find out that we are the first to be attached more to appearance than to truth, that the investigation is utterly pointless, that there are unfathomable mysteries skilfully moved along by the authoress.
But we already knew all this. It’s the same the world over. Even in far Pampa.

Ra Sh
All his mirrors were women. They displayed him with breasts and vaginas and flesh buds. Desperate, he approached a blue lake to see his male splendor. His cock-a-doodle-do his rippling muscles his...