Home Reviews Look out for the book VVAA – Living Labor 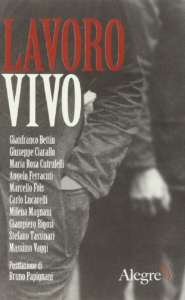 Choosing  to tell the world of labor, the real one, live, experienced day after day by people who do or suffer it- in ten short stories by different authors, is a courageous and almost desperate task. Yet this book, the brainchild of the late Stephen Tassinari together with FIOM of Bologna, fully succeeds.

The collection shows how very diverse authors may have a common ground and work on it, each in his/her own closed room, in perfect harmony. The result is a mosaic, telling different stories, and placed at different times; a priceless novel about labor. Gianfranco Bettin ‘s “Jungle contract” is a bitter story about dirty business conducted by noted and authoritative companies at the port of Marghera, written by a well documented author (his published works include “Petrolkimiko. Voices and stories of a peace crime “) who was born in Porto Marghera. A punch in the stomach, but still sweeter than the stories that follow.

Dramatic and hopeless, Giuseppe Ciarallo’s  fine writing digs, with “Eqquessaè”, in a not so distant past as the sixties to recompose the long trail of factory exploitation, “where we died, we got sick, we had casualties, and from which we were kicked out as soon as we became useless. ” The author leaves his distinguishing biting irony to plunge completely in a bunch of shattered, dark illusions.

New York, 1911: a fire destroys the Triangle factory. Maria Rosa Cutrufelli, in “Fire in Manhattan,” tells the dramatic events that led to the establishment  of the “March 8th “ Memorial , and she does so through the living voices of three witnesses. A clear and dry writing for a dramatic and balanced narrative. It brings the merit of reminding us that the “March 8th” Memorial is not a feast of flowers.

“Manovia” is the impassioned story of a worker who makes shoes, proud of his work. Angelo Ferracuti begins with describing the exploitation and the conditions at work to get to the “level” of the famous Antonio De Curtis.

“Without skin,” by Marcello Fois, tells the yield to “undeclared work, with no guarantees, no contract, no insurance” and the desire, indeed the necessity, of redemption, even in the face of that majority that ducks without rebelling and obstructs those who want to.

Carlo Lucarelli, in “I have to tell you something,” is a classic case of death on construction sites, one of those easy-to-prevent deaths. But safety is only a written rule, not really practiced. And the connivance of those who do not want to lose their job accepting to give up with any warranty, makes rules impossible to be applied.

“No Cap”, by Milena Magnani, is a story of African laborers in Salento, abused and blackmailed by corporals on duty. But above all it is the story of a revenge: united people can be strong, and there is no one valid reason to lower one’s head. If you do so, you only have to lose. This tale is quite effective despite some overly rhetorical passages.

In “But writing is a job?” Giampiero Rigosi doesn’t know how to answer the question, and it takes fifteen pages to let us know. He doesn’t know what to write, and explains why: he feels guilty towards those who do manual work, and explains why; but he never gets to an answer, not effectively showing the hard work, the dedication and sweat required by writing. It brings to an agonizing doubt: why waste so many pages with this silly story, instead of leaving space to another author, who maybe had something more to say?

Stefano Tassinari knows better than anyone how to put his finger on the wound with a poignant, painful and never rhetorical story, written from the heart. “The harsh memory of an absence” can go really deep, clear and bitter, to the so-called “white-deaths” crimes: murders for profit and for negligence. Because a war is taking place, “on the one hand the aggressors and on the other those who are forced to defend themselves but with bare hands.”

The collection ends with “Spare parts”, by Massimo Viaggi, a moving testimony of a worker forced to work for years surrounded by asbestos. “Imagine that in the center of the factory the workers of a subcontracted firm, in a chamber formed by cellophane sheets, were spraying the carriages sides with asbestos flakes. They’re all dead.”

Also interesting are the final notes by Bruno Papignani, who tells the birth of this anthology and comments each story through his own personal experience.

This is a book which, even in fiction, is a testimony almost never losing bite. It should be included in the bookshelves of all those who have a conscience.

But it should be read especially by those who just do not have a conscience.