Home Reviews Look out for the book Ludovico Ariosto – Satires 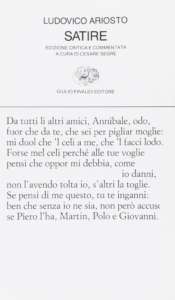 “My seat for a turnip”

What would you think of the life of Ludovico Ariosto, an author capable of creating a poem such as the Orlando Furioso, defined – quoting Italo Calvino – a world of its own; set in the XVI century, where everything was changing though, at the same time, standing still; and in a country like Italy, where you only had to know some cardinal to get promoted? Maybe you would picture him as a courtier, a man very attentive to powerful people’s needs just to climb the insidious social ladder.

Well, nothing of the kind: in these seven satires, written between 1517 and 1525, Ariosto portrays himself as a man whose only care is freedom. And the one to which he refers is not so much the freedom of thought, already celebrated by so many, but rather the freedom to do anything you want and to enjoy life.

In 1517, when Ippolito d’Este, the Cardinal of Ferrara, wants to take him to Hungary, Ariosto writes his first satire to his brother Alessandro: it begins by making fun of courtiers who, with their flattery and smiles, would do anything to ingratiate themselves with their Lord; then he complains that up there, beneath the Pole (even though Hungary is not that close to the Pole), it is too cold, that the heat of the stoves permeates the rooms and that the wine is too strong: Ludovico even dilutes the one from Tuscany with water. And then he cannot abandon his family, in which there is also a paralytic. In short, he would just like to relax and write verses.

But a journey of some sort has to be done, so his second satire talks about the one to Rome. Here Ariosto has something for everyone: for the friars who, once seated at the table, no longer hear the doorbell, and for the endless wait before some high ecclesiastical office grants an audience: they are so busy, says the poet, that they could even make Jesus Christ wait. He also refuses the offer to become an archpriest, made by an old man who feared he would be poisoned by someone wanting to take over his office. Ariosto reiterates it yet again: better to have freedom than the most prestigious Roman cardinal’s hat.

The theme of freedom keeps returning in the third satire, when it is compared to a swallow that dies after a day in a cage, and it becomes even touching in the next one: in the fourth satire he’s been a ducal commissioner for a year and cannot stand it anymore. While reading his verses, it seems like we can observe him from above and inevitably one thought comes into our minds: “Ludovico, you who wrote the Orlando Furioso, what the hell are you doing among these idiots, who kill each other for the theft of two goats?”. And we might also ask ourselves if what we do is what we really want to do.

The fifth satire is about marriage and Ludovico gives his cousin Annibale advice on how a woman to be married should be like; he says that it is of the utmost importance to look at her mother: she will certainly become like her.

The sixth one is definitely the least amusing: it is addressed to the poet Pietro Bembo and Ludovico seeks advice on his son Virginio’s education. Ariosto considers poetry as the only immaculate thing left in the world; poets are the problem, since he thinks of them as sodomites.

The seventh and last one, written in Dante’s triplets, underlines even more so the desire of the poet to be left in peace to write his verses, to remain close to his birthplace and, even though he doesn’t admit it openly, to stay with his beloved Alessandra Benucci.

Ariosto’s satires are almost five hundred years old now, but – as they show – not much has changed since then: we’re still caught up in a mad scramble for power, and everything revolves around money.

This little book raises an immense need for freedom: not an abstract one, which only remains on paper, but that kind of genuine freedom that concerns first and foremost ourselves. Ariosto was a governor among murderers for only three years before going back to his Ferrara to devote himself to his art; while others remained entangled in their seat of power forever.

It takes only two triplets from the third satire to sum up his belief:

Who yearns for the honor of the spur or of the hair,
serves the king, the duke, the cardinal, or the pope;
I don’t, I don’t care much about this or that.

A turnip tastes better in my home
That I can cook, and baked I fork it,
And I clean it, and then I spread on it vinegar and wort.