Home Reviews Look out for the book Mary McCarthy – The Group 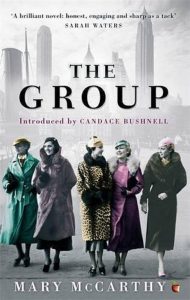 Sex and the City has not invented anything

McCarthy shows the reader, with courtesy and irony, the first steps into adulthood of eight girls who graduated from the prestigious Vassar College in 1933: Kay, Priss, Dottie, Pockey, Lakey, Polly, Libby and Helena…plus a few other supporting characters.

The time frame that is considered – about ten years – is a parenthesis between the Great Depression and the threat of another war; between the end of an economic crisis that has left greater or lesser traces in the girls’ family assets – enough for some of them, such as Polly, to consider work no longer a mere diversion, but rather a necessity – and the menacing shadow of a catastrophe.

These young women’s first confident steps are often met by obstacles and always mark a change of course from their original intentions. Liveliness and enthusiasm have to come to terms with reality. There are a few surprises: for instance, one who marries the wrong man and the other who turns out to be a libertine; another, Dottie, whose mother wants to be her friend, and Kay, whose husband (always the wrong one), is eager to have her interned in an asylum in order to continue to do what he wants. Any event, even the most detestable and mean, must be dealt with with a happy face, as befits good girls. This smile, however, comes at the cost of self-denial. Too high a cost to pay.

The novel offers a mosaic of unforgettable characters. There is the nonconformist who becomes a conformist, and the opposite; there is someone who tries to make a career and is told that it is no place for a woman; another who does not look for love but finds it unexpectedly. The author tries hard to make us smile, even if it is a tight-lipped smile. The situations are credible, and the dialogues piercing.

It is very amusing to see each of these girls through one another’s eyes, as in a game of mirrors. The multiplicity of viewpoints supplies the reader with some well-rounded characters. Instead, when describing such eccentric characters as Pockey and her absurd, super-rich, silly family at the mercy of butlers and servants, the tone is purely satirical.

Within the novel we find genius, mediocrity and folly, often wiser than normality. The evolution of an age with its many manias is investigated with a sharp eye: motherhood no longer generates quiet, natural joy, psychoanalysis is pilloried as a mere alibi never to change, politics is a meaningless game, sex is a problem; Europe is presented as a distant object of desire.

The eight friends are like pioneers in a world which changes but never keeps up with them. The male, almost always, is the one who puts on the brakes. Your desire will be for your husband, and he will rule over you – states the Bible, and right now not much seems to have changed. Nothing new under the sun! All girls find out at their own expense how men are irretrievably different and distant, a true counterpart. A man does not need self-justification to pursue his own selfish ends: he just does that. The hard way. What can a poor smiling girl do against such determination? May the key to happiness be the riddance of men, as the end of book seems to suggest?

A brilliant and witty text.