Home Reviews Look out for the book Massimo Carlotto – Nothing, nothing more in the world 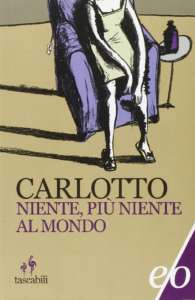 Massimo Carlotto recounts, in an amazing monologue, a family tragedy that pours out from a daily life without future, from an ignorance made up of prejudices, from a Government that has long ceased to guarantee rights and services.

The first-person narrative is useful to this short work, the title of which is pulled out from the lyrics of the song “Il cielo in una stanza” (“The sky in a room”), that for the main character it represents both a symbol and a promise of unfulfilled dreams, crystallized in a sentence that becomes both an obsession and the paradigm of unhappiness. The only still alive chimeras are those that her daughter will be able – and later she will be forced – to realize, to redeem the mother from the nothingness where she has fallen. And, if her daughter won’t do it, she will be responsible for her anyway. Because fault is both always and only someone else’s: her husband, who isn’t able to realize his own dreams of well-being, and forces her to work as a cleaning lady to make ends meet; fault is even of her daughter who refuses to sacrifice herself and sells her body to appear on TV, the only real possibility of redemption for the poor, or to exploit her beauty to get married to a man who can guarantee well-being to her and her family. With such a family, a mother can only drown her despair in booze.

The shipwrecks of life generate frustration and pain, frailty and exasperation, a grudge and an inextinguishable, unreasonable anger. Which can lead to the uncontrolled fury of those who see (isolated from the world and with TV as their only reference) all the hopes withdrawn from them, and who decided to make their offspring a scapegoat.

The writing style is blunt, linear and it opens up with disturbing glimpses on the liquid society in which we find ourselves drowning. In a handful of pages Massimo Carlotto shows us the ghost of a society that is no longer used to thinking, but only busy with the revenge and the reprobation of someone else, above all those people there, the non-EU immigrants, who steal away jobs from Italian people. A social anger that pour out from personal delusions, from a world based on an increasingly exasperated classism (but masked as goodism), from a blind individualism that no longer allows us to recognize the other as our neighbor. Carlotto exploits a series of clichés just to show us the poverty of the clichés we are fed with, dogged between television, with its unattainable models, and consumerism with its special offers, which reduce our lives to stereotypes and commodification: he does so with a stringent effectiveness, engaging the reader in the mother’s point of view (and, for a few pages, in the one no less poor of her daughter) with an incisive verisimilitude. As Woody Allen said: “Life does not imitate art, it imitates bad television”.