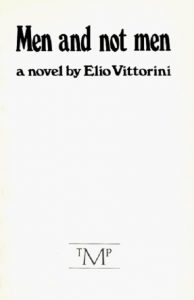 There was a man in 1944 who was wanted by German police and was forced to take refuge in the mountains. That was where, in the space of few months, he would write one of the most symbolic of Italian Resistance novels. That man was Elio Vittorini and his novel was Men and no (men).

Men and no (men) takes place in the winter of 1944 in Milan. The main character is called Enne 2, the captain of a group of partisans, who is madly in love with Berta, a married woman who returns his feelings, but is forced to deny them. This is the starting point of a tragic story that drives the reader into Selva’s kitchen, drinking wine with Enne 2 and Berta; into the SS’ hotel rooms, where Son-of-God, an infiltrated partisan, plans the German Sheperds’ escape from the Nazis; in San Vittore prison’s courtyard along with poor Giulaj, torn apart by those dogs for revenge. Finally it ends between Largo Augusto and Piazza Cinque Giornate, where the bodies of men, women and children killed in retaliation are on exhibit to the crowd, which can only cry in silence. Nevertheless, Vittorini tells us that crying is wrong, because if we cry we both accept what happened to them and we lose them. And we must not accept, we must not lose them. ‘What do we do if we cry?’, asks Enne2 to Berta. Everything becomes pointless. It’s important not to forget what the dead teach us: they teach us what they died for. Elio Vittorini tells the story in a new avant-garde style using rhetorical questions and anaphora to enhance the images. A unconventional writing style in those days, which springs from a precise project by the author, always looking for some sort of reconciliation between reality and literature. This does not prevent him from being extremely symbolic: for instance, with the description of the relationship between the Son-of-God and Blut, one of the SS’s dogs, forced to tear apart Giulaj, the chestnuts’ seller. The shame felt by the dog for its action is extremely touching and forces it to take refuge under the bed. It will no longer be a man’s dog, the man’s best friend. It’s here that Vittorini questions more, wondering if what men do when they offend others is part of human nature in itself. Wondering whether Hitler himself, in the same circumstances, with a Son-of-God by his side, and being aware of his actions, would yelp and rush under a bed moaning. The author’s notes in italics are peculiar and very effective, which almost seem to mark a language of dissociation and highlight his reflections through the inner world of Enne 2, torn between the human side, represented mainly by his painful and impossible love for Berta, and his struggling, violent side, as partisan of action. Ultimately, Enne 2 will be defeated anyway, he will let himself die in his room while waiting for the clash with Black Dog, symbolizing the Enemy. Published soon after the end of the war, in 1945, Men and no (men) is recognized as one of the first novels to question war, the idea of right and wrong and to deal with the issue of discerning those who are really men and those who are not.