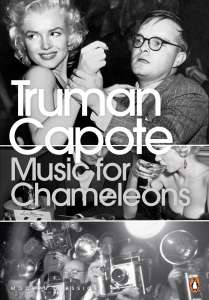 The book “Music for Chameleons” is a theoretical and practical masterful class of literature and style of the great Truman Capote, in my opinion.

The theoretical part is the preface, where Truman undresses himself and openly talks about what is literature according to him: a noble but merciless master. God gives a gift but with it comes also a whip, whose use is exclusively self-flagellation, the writer confesses. As a matter of fact, he says that he feels like a gambler, a card player who does not know if he will win the game. Capote knows that he masters the technical skill, for which he has rehearsed every day for 14 years of his childhood, as would a violin student, but where does the genius lie?

He was tormented about the fact that the difference between good writing and true art is subtle but brutal. And it was during this rambling that Truman discovered his own style: the journalistic novel should have the credibility of fact, the immediacy of film, the depth and freedom of prose, and the precision of poetry.

Truman opposed literary truth to what is really true. The latter would be journalism, one that responds to the five “w”, that is What, Who, Where, When and How, while the literary truth would introduce its fantasy to make reality even more plausible. Events, characters, places, everything is real but Capote makes the reader “enter” into the atmosphere by introducing smells, feelings. He also makes use of almost theatrical dialogues, even with the typical punctuation of theatre plays in the case of “Hand-carved coffins”, making his writing more actual.

For this long story, which to some extent is similar to his famous novel “In Cold Blood” because in both cases at the same time that he was investigating a crime and discovering different details as he was writing the novel, Capote stands alongside the reader and it seems that we could engage him to exchange views on who the murderer was, or how it happened, or the reasons for it. In Cold Blood, however, the narrator disappears, it is a camera that is showing its discoveries for the reader to go and judge. Truman’s genius lies in this, having created this testimonial approach that makes the reader a subjugated and active observer facing the novel.

In any case, the real conditions set the pace and makes the documentary story true. Sometimes this pace would seem ineffective and it would be if it were not for what happened, did so as it has been narrated. The same applies to the end of these stories, which sometimes disappoint, but yes, sometimes the consequences of our deeds vanish just like that. The reality is a straitjacket but also it
is part of the aesthetic pleasure of these stories. Reality makes them fascinating, in my opinion.

I would not like to unveil anything else about these tales of Music for Chameleons but in them we will find magnificent icebergs (as the story that gives this book its title), stars that become palpable, like Marilyn Monroe, or pseudo theater plays like “Nighty laps” or “Sexual Experiences of two Siamese twins” in which Capote himself talks to his other self. Master stories, which as the practical part of this class, are displaying life, in its poetry, its misery, its transience.