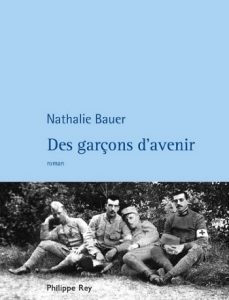 Based on on her grandfather Raymond Bonnefous’ diaries and letters which she unexpectedly found in a wardrobe, Nathalie Bauer recounts us the First World War from a privileged point of view: the one of an auxiliary doctor who acts mostly behind the lines and therefore has the chance to live and observe the war from a certain distance. Nevertheless, Raymond’s glance is not a distant one: it is the glance of a man who is used to deal with death from close up, since he has to assist the injured and he watches them die, broken into pieces, in his arms; it is the glance of a twenty-two years old medical student who has suddenly been sent to the battlefield and is sharing a four year long hellish experience.

In spite of the fact that the world war is the setting of the story, the author does not give us a wartime novel; but rather a formative work in which the main theme is friendship. This relation expresses itself through unforgettable characters, such as the bourgeois Declerq and the intellectual Morin, with whom Bonnefous will experience life on the frontline as well as on leaves. The officer’s valet Jules and Father Lemoine are also very important characters.
Worthy of a particular mention is the character of Zouzou, a young woman that Bonnefous and Declerq meet while on a leave: the genuine friendship that both men establish with her at the start, gradually becomes more intimate to the point in which blatant jealousy sparks off a conflict between the two loyal friends.
The French author echoes some themes of Jules et Jim and she produces the portrait of a woman in the process of becoming emancipated, both sweet and determined, firmly resolute to lay out exact boundaries in order to safeguard her freedom and her self-determination. An unforgettable character who sticks to one’s mind, stays in our hearts and whose adventures counterbalance the cruel war events.
The contrast between the landscape of the frontline and the one of the places visited when on leave emphasizes the clashing difference in perceiving the war, where civilians, quite far from the battlefields, seem to live without caring about the conflict as if they didn’t realize its impending presence that could overcome them at any moment.
Perfectly balanced between reality and fiction, novel and history, very well researched and always rigorous from an historical point of view, Hopeful young people is a novel about memoirs written in an actual and polished language and able to give the readers moments of high poetry and get across the main characters’ anxiety as well as their sadness; for them death is lurking and holds in store sudden and bitter surprises. This is the story of a lost generation, that is being sacrificed by the causes of war but never hopeless, always projected towards a hypothetical future that maybe will never arrive. This novel is a warning and a celebration of life and peace, an experience that the reader lives side by side with the characters, completely absorbed in their stories to the point of sharing their hopes. And it also tells us about a new world, not necessarily a better one, born from the ashes of the lost one.
This is a truly great novel, one of those literary works that we haven’t come across for decades, that reminds us that the events that happened one century ago are not so remote, even though we often feel them in that way: a war is always around the corner and we could become its main characters.