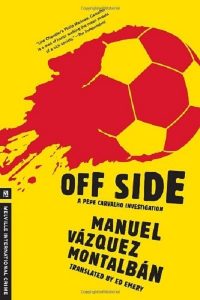 Pepe Carvalho, Montalbán’s symbol-character, finds himself investigating on the threats a city football team received about its striker’s murder. The player is Jack Mortimer, a young English emblem of the new generation of rampant champions idols.
The counterpart to the story is Centellas Fútbol Club, a trudging team in decline that has to place its hopes in Palacín, a skilled player but with too many years and few minutes of play in his legs. The disparity between the two teams perfectly epitomizes the different speed of the city itself: on the one hand, we have the freedom from a recently ended dictatorship and the political and social evolution; on the other hand, the preparations for the ’92 Olympic Games and the dream of development and modernity. On the one hand, there are immigrants, prostitutes, drug dealers, suburbs and degradation; on the other hand, regimental ties and land speculators. Football, in this context, becomes an exact metaphor: it is the sublimation, through sport, of the aggressiveness that has grown in a urban artificial scenario.
Literature also has a role in Montalbán’s novel: the author of the threat letters quotes (in a rather pompous and smug way) classic authors and models; Marta, a young drug addict prostitute, offers her customers “literary fucking”. Pepe Carvalho instead burns books: since culture separates us from life, fakes life sentimentality “as antibiotics destroy the body’s defences” (see Tattoo, by the same author). Therefore, burning books is burning useless truths. Carvalho finds his truth in other pleasures, especially food . Disquisitions on cuisine make the most pleasant pages of the novel, rich as they are of flavors, smells, suggestions.
Off Side is a good novel, written in a neat prose that has much less to do with football than it would look like; its interlocutory epilogue leaves more than one unanswered questions.