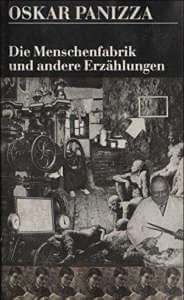 What are mentally disordered people, really? Why do human societies choose to get rid of them, to bury them in asylums? Perhaps to cure them or, rather, to prevent them from speaking? Is it because they own a destructive power, or because they express what the so-called sane don’t know, or can’t bear to hear?

Oskar Panizza is the author of the four short stories collected in Die Menschenfabrik und andere Erzählungen (The Factory of Men and Other Stories). He lived in Germany in the late 19th and in the early 20th century, in the time span between Otto von Bismarck’s chancellorship, the foundation of the Hohenzollern Empire, the First World War defeat and the birth of the Weimar Republic. At his time, he was considered a mentally disordered person, and officials tried to silence his voice over and over again. After publishing his early works, he was accused of offending religion, monarchy and the government. Then he was sentenced to prison, and closed his life after many confinements in mental hospitals.

Today we know that, despite the harmless obsessions he cultivated and represented in his art, Panizza certainly was less deranged than his own time and his own country. His was the age of the Prussian militarism, when an orderly and disciplined people was faithful to the Kaiser and to the Lord of War. An entire nation nurtured the dreams of power that, in the space of a few years, would produce huge tragedies.

Oskar Panizza was not crazy. Rather, he was a clairvoyant with a ‘crystal sight’. He had a third eye that, beyond the conformism of a blind society, enabled him to perceive the real nature of the German Man – and perhaps of all mankind. The mechanical state of a marionette, created and covertly controlled by an unreachable puppet-master. The nature of a submissive mass-produced robot, a gentle and unassertive automaton willing to carry out any sacrifice in return for the only form of nourishment he recognises – the promise of military glory and, above all, religious illusion. However, when faith and military pride collapse, even a perfect machine may jam, and dreams can turn into a sense of guilt.

Oskar Panizza’s versatile and varied prose is perfect for describing this apparent contradiction. In the eponymous short story a mocking master-scientist-creator leads the protagonist into a strange factory, where he discovers with growing concern that the products are men, a sort of little, obedient golems, made only to be slaves. In Das Wachsfigurenkabinett (The Waxworks) the religion illusion is portrayed like a grotesque play about the Passion of Christ, performed by men and puppets together. The play fascinates and captivates the minds of the audience, finally triggering their violence.

The disturbing Der Korsetten-Fritz (The Corset Guy) is about a reversed conversion, as it describes the descent of a seemingly flawless theology student into the black hole of Lust and Madness. The protagonist is completely at the mercy of his uncontrollable fetishist passion not for female figures, but for a part of them: the chest, without arms and legs, only clad and enriched by the corset.

Die gelbe Kröte (The yellow moat) is a nightmare en plein air. It is not about a human turning into a machine but, on the contrary, about an inanimate machine coming into being and threatening the mental sanity of men. It narrates how a leisurely trip on the river Thames on a sunny day turns into a horrific hallucination, after the protagonist’s encounter with a yellow boat, the symbol of a vengeful spirit rising directly from our invisible souls.

There’s something, in Oskar Panizza’s short stories, that reflects the German spirit in its most uncommon and visionary sense. Actually, his texts recall some constant features that often occur, before and after the life of the writer, in the works of that culture. In Panizza’s mechanical automatons it’s easy to see the animated dolls of E.T.A. Hoffman, one of the forerunners of the Fantastic in literature; in the obsessions of his characters the sense of guilt of Franz Kafka’s heroes; in his mass-produced men the enslaved workers of Fritz Lang’s Metropolis and Thea von Harbou’s homonymous novel. In the industrialist of Die Menschenfabrik the archetypal image of Der Führer, a man who, shortly thereafter, would militarize all Germany.

What frightens and, at the same time, captivates the readers of Panizza’s texts is precisely the unmistakable mark of the dual nature of an unfathomable people that is simultaneously tragic and logical. Due to its ambivalence and its clever, hallucinated in-depth detection of the human soul, Die Menschenfabrik proves, once again, the fascinating and revealing power of literature. To those who believe in imperfection, in nuances, in shadows, in alterations, and in deepness, literature provides an accurate confirmation of the lack of rationality in the world. Instead, to those who have an unshakable faith, a strong mind and undaunted principles, to those who are certain of sanity and of unlimited growth, to those who live unaware and hopeful, literature recalls the invincible strength of chaos that sooner or later each human being will experiment in its overpowering complexity.