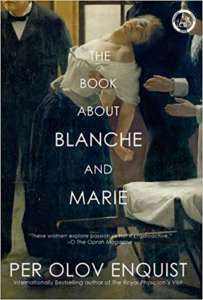 A near-perfect structure which contains traces of morbidity and which skilfully releases images that strike mind like sharp tannins strike the palate: this precious novel needs to be decanted like a vintage wine.

Once finished, the book needs to be closed, and its bouquet allowed to circulate freely in order to be breathed in deeply. We are struck as if by a sharp slap in the face, not strong but unexpected, and we have to feel the burning sensation and the tingling cheek in order to totally experience it.
The thread linking the considerations, memories, stories, and personalities of modern science, painted in thick, rich strokes, is a diary written by Blanche, “queen of hysterics”. She was Charcot’s patient in Salpêtrière Hospital and Marie’s lab assistant, that same Marie Curie of the radium, the Nobel prize, the Nobel prizes, of scandal. A diary which – as rightly stressed by Dacia Maraini in her clear and lucid afterword – seems to be a literary device: perhaps Blanche Wittman never wrote this book, maybe it’s Enquist’s invention. But readers don’t really care. Trying to prove whether it exists might actually be going too far. That’s not the point.

It is a diary written with the only hand left on a body reduced to a trunk, after the amputations caused by exposure to radiation in Curie’s lab. A piece of a human body that talks about love, if not exactly about her own: the love of people close to her and also of that Love that everybody understands, or maybe nobody does, but tries to, anyway.
It’s basically the story of a scientific discovery so, in a way, a story that belongs to humanity, but tightly woven into Blanche and Marie’s personal lives; it is written in a surprisingly feminine tone which reveals the poetry in research, the human being behind the scientist, the subjective behind the objective. Even for barely sketched characters like Sigmund Freud or Albert Einstein, reference is made to their human figure, not the scientific or historical; and this reference is mute, not explicit.
Enquist’s voice resounds throughout: his memories, his filter, his interpretation. It’s extraordinary the amount of personality that there is in a book that narrates other people’s lives.
With a quiet, almost hypnotic, tone but full of passionate and charming images, the author digs deep, performing a kind of autopsy on love, emotion and sorrow.
In the background we can see the toxic luminescence of radium, a flickering as fascinating as it is poisonous, analogous to the considerations about love that go through the whole novel.
This lethal glare constantly accompanies our reading, drowning us in a muffled atmosphere, dreamy but cruel at the same time: “But Blanche Wittman would long remember that Sunday afternoon when she and Marie, two beautiful women alone in the laboratory, hand in hand before the inexplicable miracle, were engulfed by the mysterious colors and radiance which, without them being aware of it, would shape the entrance of modernism into the museum of love, the as yet utterly perfect bodies of these two women”.

Per Olov Enquist is a Swedish writer, playwright and journalist, born in 1934 in Västerbotten.
After a degree in the history of literature at Uppsala University, Enquist started to work as a columnist for two of the main Swedish newspapers, becoming an influential figure on the Swedish literary scene of the ’60s and ’70s. He has been awarded several prizes, including the Nordic Council’s Literature Prize, the Selma Lagerlöf Prize and the Flaiano prize. His works have been translated worldwide into more than 20 languages.