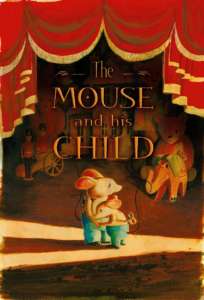 Not only a children’s fairytale

The mouse and his child written by Russel Hoban is not a children’s fairytale. It is the story of a special couple composed of a father and his child, a fairytale for adults, that deals with two characters made of metal with their hands bound. Both mice work thanks to a spring placed inside the parent’s body. This fairytale is a great and unexpected adventure through a world full of waste.

The mouse and his child are part of the same toy: the father keeps his child in front of him and thanks to his mechanical movement lifts the child and dances with him, eye to eye, indissolubly, till the clockwork allows them to do so. Nevertheless, they are two distinct entities. They have different expectations and even the way they face the world differs. The engine that enables the child to move is located inside his father: the father is the down-to-earth one, the concrete one, but also the already disenchanted one; his child is the daydreamer, empty in his shell made of tin, but he fills the emptiness of his body with his dreams and with his hopes for the future.
Another thing that makes life difficult for this toy divided into two pieces is the clockwork: they always need someone to recharge them. For this reason, they are searching for a solution, someone who is able to create a mechanism that can free them from this dependence.
Their story is a journey full of danger and frightening characters, unlikely alliances and metaphors on thin ice: a restless wander in the dark, with some lights here and there and the meaning of life that illuminates the path. Too often we believe that our world, and what we can perceive, represents the whole world and we pretend to evaluate each event with this vision of life.

The fairytale that Russel Hoban, spokesperson of the “magic realism” so dear to Calvino and Marquez, interlaces with indestructible strings, unscratched by the flowing of time, is a fairytale with a moral sense, but nearly without morals, always hovering between the twisted clank of the words and the sparks of poetry, without derailing.

This story is about the relationship between a father and his son. It deals with realized and unrealized dreams and with the fast rushing river of time, not always on a human scale.

Translation by Francesca Sabbadini and Alessandra Franconi; edited by Jenovia Amisti Smith.
Francesca Sabbadini and Alessandra Franconi are students of the Linguistic Sciences and Foreign Letters faculty at the Catholic University of the Sacred Heart in Brescia, Italy; they collaborate with Inkroci in the translation project coordinated by Professor Jenovia Amisti Smith.