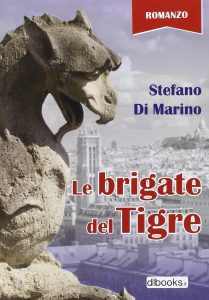 Paris: Between the year 1912 and 1913, at a crucial moment in history. Stéphane Renard, the commissioner of the Police Brigades must solve a series of murders and mysteries that are occurring more and more, clearly in a common matrix. An international conspiracy is hatched by an invisible enemy who is working together with the Austro-Hungarian secret services.
Backed by his chief, Captain Faivre and aided by the new scientific investigation techniques of Professor Bertillon, Renard has to deal with the elusive Phantom, follower of Fantômas and with Fleurs de Lys, a legendary criminal fraternity while upon the Ville Lumière falls the shadow of a scandal cast by the financial speculation of a group of businessmen in cahoots with a shady wheeler-dealer.
The protagonists of La vendetta del Fantasma or “The Revenge of the Ghost” (Dbooks, 2012) are back, in an autonomous novel among some of the most exciting of those written by Stefano Di Marino. The plot has its roots in the historical events of the century, and offers an imaginary (but not too elaborate) interpretation of the events that led on June 28, 1914 concerning the assassination of Archduke Franz Ferdinand of Austria-Este, and the outbreak the World War I.
The author knows perfectly how to recreate the atmosphere of the time without resorting to exhausting descriptions, and with the stylistic directness so congenial to him, combines history and adventure in a unique example that recalls not only the dazzling series of novels written by Marcel Allain and Pierre Souvestre (who relive in the character of the journalist and writer Alain Souvestre), but also The mysteries of Paris by Eugène Sue (1943), The phantom of the Opera by Gaston Leroux (1910) the RAI memorable dramas Il segno del comando – The command sign (1971 ) and Ritratto di donna velata – Portrait of a veiled woman (1975).
Stefano Di Marino always writes in the genre of adventure, but this time he surpasses himself plunging into the popular fiction at the turn of the century in a highly successful attempt to actualize the narrative form of soap opera. The result is a memorable novel that you read in a flash, despite the size, pulled in by the events. His work is never boring or predictable; the tension is palpable, riddles and secrets overlapping to form a thriller quality of great effectiveness. There are several quotes in the novel, never trivial yet always amusing and over and beyond the pure entertainment, Di Marino reminds us that faced with the machinations of history, even the winners are losers.