Home Reviews Look out for the book Emmanuel Carrère – The Adversary 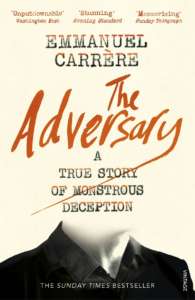 With few exceptions, all Emmanuel Carrère’s major works could be classified as a unique autobiography realized under the pretext of narrating other people’s biographies. His personal quest for authenticity complies with the lives of his literary models, almost always real characters, whose existence is an echo of the author’s most intimate wishes, tastes, affections, and private memories. This happens in almost all his books, the biography of the science fiction writer P. K. Dick, of the multiple murderer Romand, or of the Russian revolutionary Limonov facing today’s fading myths of Russia and United States.
The author’s, the narrator’s and his characters’ lives are blended in a realistic fresco of French society, from which the common thread of the writer’s existence discretely stands out. Even the choice of biographies is autobiographic: Dick, a master of science fiction, represents the myth of Carrère’s adolescence, his dreams of escapism; Romand, the multiple murderer and falsifier, the pursuit of his own authenticity in adult society; Limonov, the Russian poet and civil rights politician, his career consecration and need of a comeback to the Russian imaginary of his mother, a sovietologist and member of the French Academia. The result of this delicate pastiche of lives is an extremely empathic writing style , enigmatic, disturbing, of a voyeur who watches, hypnotized, the mystery of the black hole around which condenses the core of everybody’s personality.
Published in 2000 and inspired by the sequence of events of the affair Romand, the Adversary is with no doubt the most painful of the identifications to which Carrère exposes the reader. The incident is very well known in France: on 9th January 1993, Jean-Claude Romand, researcher at the WHO, the World Health Organization, kills his wife and two sons of 5 and 7 years in Lons-le-Saunière. The day after he shoots his parents, burns his home, and tries to commit suicide by swallowing some expired medications. Jean-Claude is saved by the firemen and brought to a hospital, where he lies in coma for days before waking up and being accused of multiple homicide by the police. The truth emerges during the process: the respected medical doctor Jean-Claude, researcher at the WHO, in reality doesn’t exist and never existed.
Submissive guy, grown up in a climate of mandatory transparence, wishful of satisfying the expectations of his family, Jean-Claude in reality never passed his second year of the faculty of medicine. For 18 long years he lived a fake life, swindling everyone who knew him with a perfect mask of success and social conformism. In his personal quest for authenticity around this big horror vacui person, Carrère asks himself the unsettling question of what might have survived of a man when the only mask he owns is taken away from him. I tried to narrate with precision, day after day, that life of loneliness, imposture and absence; to imagine what came to the mind of a man during the long empty hours which everybody though he was spending at work, while being instead in a parking lot of a highway or in the woods of the Jura Mountains, with no plans nor witnesses, declared Carrère.
For 18 long years, Jean-Claude Romand, the man who never existed, cheated his wife, parents, colleagues, lover and above all himself, without even building a real double life, which might have prevented him from becoming insane. Having lost the mask of the Adversary, the devil’s biblical name, nothing would have survived of him but the horror of the emptiness.