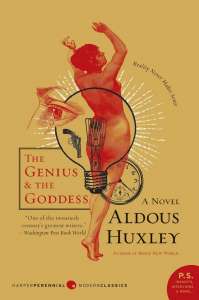 “The trouble with fiction is that it makes too much sense. Reality never makes sense”. With this incipit Aldous Huxley immediately offers the readers the key to enjoy the tragic harmony of this short novel – The genius and the goddess – written in 1955 and disappeared from the Italian literary scene for many years.

What are memories for? For telling experience. What is experience for? For finding the life breath of our existence. To mark, as the finishing touch of a painter, the moment when a picture becomes a work of art. That’s what old John Rivers brings to his friend, a writer, on Christmas Eve of 1951.

In a sort of spiritual testament, John retraces his 15 months spent as an assistant to Henry Maartens, Nobel Prize for Physics but an embryo of a man in private life. Invited to live with Marteens’ family, John meets Katy, the young and charming wife of the genius, by whom he is irresistibly attracted, and their two children. Little Timmy concentrates his world in electric trains. Teenager Ruth, who soaks reality into literature, falls in love with the new host. It’s Beulah, an elderly black maid “old comedy style”, who holds the ranks of the wacky family. It’s the year 1922 and Rivers, an inexperienced and clumsy twenty-eight-year-old guy, son of a Lutheran pastor who died too soon and of a bigoted mother, is swept into a world that unhinge, with ferocity and ecstasy, the rigid stereotypes in which he was raised.

With a fine style, sometimes filled by redundant literary quotations, Huxley gives us an intense reflection on the invisible interactions between intimate relationships. Events can be told, but there are no words that hold the meaningless sense of reality, because “the nature of language is such that we can’t help judging”. And the feelings and the essence of human beings can find a partial setting only with the help of the terms and the boundaries of theology. We should invent new words to express “the natural togetherness of things” as “muco-spiritual” or “dermatocharity.” Or “mastonoetic.” But no words and no novels will be able to hold the Impiety and the Grace of Love. Of which each one of us makes experience.