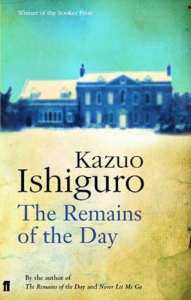 «The great butlers are great by virtue of their ability to inhabit their professional role and inhabit it to the utmost; They wear their professionalism as a decent gentleman will wear his suit: he will discard it when, and only when, he wills to do so, and this will invariably be when he is entirely alone».

Our narrator is Mr Stevens: an impeccable English butler who has dedicated his life to serving Lord Darlington, managing and attending to the smallest details of his gorgeous country house. The story begins when Darlington Hall’s golden times are days long gone: the decline of the English  aristocracy has imposed a new owner, a wealthy American businessman with much more informal ways.

However, it is at the invitation of Mr. Farraday that Stevens decides to take his first, short break. Further justification for his departure comes in the form of  a letter, received after seven years of silence, from Miss Kenton, the former housekeeper of the house, full of nostalgia for her old job. So begins a journey through quiet villages nestling in the countryside, soon accompanied by an erratic wandering through the memories of a lifetime.
Ishiguro describes with delicacy an extraordinary character, at once an archetype of one of the most representative figures of Britishness, and a complex and sensitive man, whom the reader is invited to discern behind the narrative. Stevens has always aspired to become a “great butler”, building his life upon the solid principles of dignity and absolute dedication, along with a blind faith in his master’s goodness and honesty. The reader can only imagine how many sacrifices Stevens has made throughout the years, how many feelings he has denied, even to himself  and, especially, how much regret lies behind his choices.
In a realistic and detailed glimpse of the life of the English aristocracy between the two wars, the book presents a beautiful mosaic of characters and feelings, set within the sparkling context of Darlington Hall: as much a stage for international diplomacy as for small daily rituals. At the end of the trip, on a small illuminated pier in Cornwall, Ishiguro allows us to see the man, stripped for once of his role, and to rediscover with him the beauty of the evening.