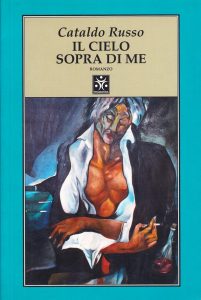 Nothing was born from diamonds

A bundle of clothes, a heap of plastic bags and newspapers covering the desperation of an abandoned body.
Unfortunately, many people see this scene and think of a problem to be solved, of an offence against good taste and beauty, of a bad example for the young ones, of garbage to be cleared away.
Few people think a human being is hidden, a heart pulses and blood flows under those clothes.
Very few people, maybe almost nobody, know that a dirty and frayed coat can hide a huge soul, a boundless dignity, a manic honesty which can be a reason for both a contemporary damnation and a salvation.
Il cielo sopra di me, published by Tranchida, talks about this.
Russo’s novel is undoubtedly pithy, with plenty of ideas for reflecting; the story of our Country over the last fifty years runs through its pages and the poor existences of its characters. Italy lives the change from a rural economy (with an unchanged difference between North and South) to an industrial one, with all its problems and the dramas that this change brings with it. Abandoned lands, emigration, most people concentrating in a few huge cities that are often inhospitable. They are not organized to welcome these masses, coming with hope and instead finding a true hell where others had described a paradise – the loneliness, the homesickness and the desperate streets.
Along one of these streets, on a bench in a garden, we meet the novel’s main character on a cold dawn; one of the many tramps we meet daily in our towns.
As I mentioned above, only the most sensitive people recognize real persons behind these ragged clothes and dirty exteriors, persons made of flesh and nerves, of ended loves, lost work, of unsafe certainties. And now a question is asked: what terrible thing happened in this man’s mind and when did he decide to throw away (even if it’s a choice imposed by circumstances) an “ordinary” past to face a future of uncertainties, hunger, cold and desperation?
To answer this question, the writer carves his work as a precious stone. First, he shows us the uncut version, the tramp covered by ragged clothes, unapproachable in his dirt, but eventually the reader sees a wonderful and glittering diamond emerge at the end of the story.
The name of the main character is Domenico Peverata and he is not a common tramp (the politically correct term today is “homeless person”). He is not a refuse of our society, actually we can say that society has been refused by Domenico, a coherent and dignified teacher at the free street university. Even after numerous attempts, society can’t find a place in the life of this person, who has made morals his philosophy in a manner verging on extremism,.
He has fought for himself and for others without sparing himself, becoming personally involved in the struggle for land by farmers who had always been abused and deprived of a dignified future; he always set friendship and solidarity in mines and factories before everything else; he loved his land with pain and suffering; how could he accept a world like ours, where everyone wants everything now, where we have lost the value of words and actions, where we have lost that love which is the endurance of suffering and of effort, the patience of waiting? How could Domenico Peverata accept the hectic pace of our time – he who was used to the slow rhythm of the seasons – that chews, swallows and vomits everything, after having made it unusable, people or things without caring?
The universe of the main character, who lives the present as in a mystic crisis, remembering his past life before the drastic choice of living in the street, is that of many of the damned of the Earth, the untouchables who daily submerge in darkness from where you can’t run away, far beyond the point of not return. But it’s different for Domenico Peverata. The author leaves a narrow opening in the main character’s future and the reader glimpses the potential of resurrection – or better, of salvation – in the darkness, given to Peverata by his lucidity, his awareness of his own condition, and so by his possibility of making a different choice.
The others are different. The still attractive whore obsessed by ageing, the transvestite who has surrendered to violence once and is now unable to rebel, the street fellows of Domenico, defeated, humiliated and hurt, without a chance, the abandoned insane persons, the drunks and the drug addicts. Even the petty bourgeois, who is unable to face the analysis of any problem that involves him making a sacrifice, or the young ones whose only form of fun (they have already tried everything) is hunting for something different to do. Everyone is lost without hope, everyone apart from the main character of the novel.
Reading Il cielo sopra di me I have found many of the faces that the great Fabrizio de André loved to talk about. I therefore correct the metaphor about the uncut precious stone turned into a jewel. It is not a good example for Domeico Peverata because, as de André sang, ‘nothing is born from diamonds, flowers are born from manure’.
Domenico chose to be manure, the one which is a source of rebirth, the one who makes flowers bloom, in his case the very rare and scented flowers of dignity, of victory even in defeat, of the pride of belonging, of goodness. Because our main character is a person, who is able to love, to look after everyone’s welfare, he is aware you can’t go to any place worthy of visiting just looking for personal happiness (unfortunately, today’s philosophy).