Home Reviews Look out for the book VVAA – The wrong way 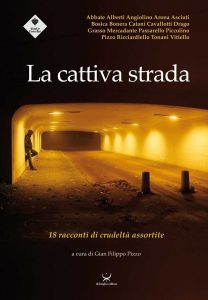 The only way is the wrong way

“The Wrong Way” is a collection of short stories occasionally reminiscent of Ballardi’s “exhibitions of atrocity”, sinking its narrative teeth into the deepest part of our subconscious. Gian Filippo Pizzo collects some of the best Italian short stories in recent years, proving himself to be an exceptionally perceptive anthologist, besides also being a high quality writer . This collection serves as further proof of the short-sightedness of the Italian editorial market in that it continues to refuse short narrative the attention it deserves.

Everyday horror, rather than the fantasy kind, abides inside every one of us. It is our dark side and it is the “wrong way” our whole society has taken, pretending to be on the right side all along, or at least to be right in promoting the worst crimes in the name of some principle or other. It is a state of perpetual civil war, everyone against everyone else, as the opposing factions are all part of the same human moral landscape.
It is no surprise that Danilo Arona, in one of the stand-out short stories in the collection, chooses as his protagonist the originator of the Jekyll/Hyde dualism. He becomes the symbol of a rotten interior acting on the impulse of its destructive passions, and regards aggressive behaviour as the best weapon. If the intended moral is to draw a line between good and bad, this line looks incredibly blurry and almost non-existent in these stories. Almost, because the short stories collected in “The Wrong Way” still have the power of provoking indignation, as is the case for the magnificent “Do you Remember Mario?” by Piero Cavallotti, a real narrative touchstone together with “A Thousand Hills” by Franco Ricciardiello.
Do-gooders could object that “The Wrong Way” is the wrong kind of literary work, in that giving evil the right to speak puts good at risk of being perverted. On the other hand , one of the merits of this collection is that it opens a crack in the armour of moralistic hypocrisy that too often refrains from inspecting the motives behind many human actions too closely. The crudeness of the images dismantle those trite alibis we routinely misrepresent as reasons to act.
Respectability does not cut a fine figure in this collection, where social rules prove ineffectual and in the face of repressed emotions and extreme situations, as in the remarkable “Tunnel Effect” by Francesco Grasso. In this story, truth peeks at the reader from behind a mask, as the characters fail to find excuses for their behaviour in the aftermath of a serious crime. Transgression, as an end in itself, becomes a regression to a dark side of ourselves that can surface anytime We turn from humans pretending we are not beasts into beasts pretending to look human. As Stevenson said , our dual nature is determined by our education, building a cage that constricts our primal selves; a series of rules to keep the darkness at bay serves as nothing but a screen to hide our true nature.
“The wrong way is only” a trip into our own selves, a trial with humanity itself as the defendant. And when the book is over one is left asking: is this horror even fictional?