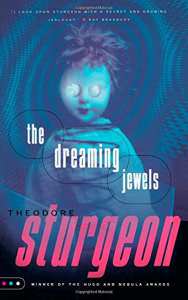 Hope is a dream within reach

After having suffered the umpteenth injustice, Horty, a weird adoptive child harassed by his stepfather Armand Bluett, decides to run away from home. After having said goodbye to Kay Hallowell, the only classmate who takes him seriously, he joins a freaky circus owned by Pierre Monetre, nicknamed the Cannibal, a despot who hates mankind. He spends a few years there, developing as a person above all thanks to Zena, his surrogate sister. The secret of dreaming jewels looms over them: mysterious beings disguised as minerals that can in fact create duplicates of objects and living creatures identical to their original copies.

The sense of deep humanity of these extraordinary pages, together with the personal and fluid writing style allow us to catch the complex and multifaceted contents of the novel with the same protagonist’s openness towards Zena, his Pygmalion. The different, anything but trivial topics contribute to form a philosophical conception of human life which resonates with any sensitive person. This philosophy seems tangible, except the world, now as then, continues to move in a different direction: it is in fact characterized by dominance, overpowering, discrimination and egocentrism. What is hidden by Sturgeon is definitely the spark of hope rather than destruction; a hope which glows in such a sublime way, at the end of the novel, to be convincing and not at all a foregone conclusion.

The topic of diversity and its refusal run throughout the novel, but The dreaming jewels is not a book on diversity: it is a book on humanity. Sturgeon manages to create the image of a deep and kaleidoscopic humanity, harsh and poetical at the same time, in each page of the novel. A humanity which cannot exist in the individualism but only within a group.

This is a masterpiece disguised as science fiction by those who need to label any written work.