Home Reviews Look out for the book Federica Sgaggio – Two Columns, below the Fold 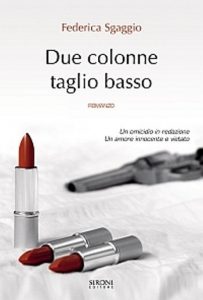 This thriller is the Veronese author’s debut novel.
In a small town, a murder bloodies the editorial offices of a local newspaper. In an articulated and choral plot, characters driven by different impulses move in different directions, sometimes conflicting, sometimes converging. The events, well interspersed with successful twists, unfold along an Oedipal path towards the knowledge/awareness of self-identity, providing an occasion for bitter autobiographical reflection on the role of the journalist; at forty years of age, one unavoidably questions one’s existential expectations, the realization of one’s dreams.

The plot unwinds according to the personal stories of some of the characters, whom you soon find yourself coming to love, and is made credible by the description of the world in which they move. This world is outlined with extreme attention to detail, that lucidly captures its passions, trivialities, obsessions and idiosyncrasies. You become involved in the characters’ live action and dialogue, in a way that makes you participate in their affairs almost cinematographically.
Sometimes, just one exterior detail is enough to give the full picture of a character: the secretary of the editorial office adjusts “one of those seven or eight red curls she loved more than her acid life as a spinster”; the secretaries in the public Prosecutor’s office “with their huge asses and tight skirts carry around folders upon folders, advancing in tiny steps, one inch at a time ( ….) And click and clack and click and clack.”
At other times, as in the case of Cinzia Guidetti, editor of the rival newspaper, you can empathise more with the private torments of a forty-six-year old woman. You see her discouraged in the shower, where she notes the number of messages that “a body is able to convey to you when it insists on communicating that it is aging.” But then “hair dryer, brush and makeup ” convince her that, if a comparison must be made, it should be made “only with women her own age. And compared to them, she was shit hot”.
Deputy public prosecutor Bernardo Montefusco inspires an instinctive trust and communicates a reassuring human warmth; as an antidote to the emotional fatigue caused by his job, when faced with a dead body with a smashed-in head, he plunges with his imagination into the sea of Capri, where he is from, and evokes for us its scents, colours and flavours.
Then there is the casual and pragmatic editor who plays his professional-sentimental relationship with colleagues for career purposes. And you become fond of the protagonist Strippo: whenever he meets someone, he tries to imagine them having sex.
The language is colloquial, but the use of words is sophisticated; the style is quick and easy. The choice of the characters’ names doesn’t seem random: the female protagonist who helps to clarify and unravel the crime story is called Chiara Lucini (Claire Small lights); the name of the murdered deputy editor-in-chief, a skilled manipulator of news, is Silvio.
The author’s profound ability to penetrate different and varied individual psychologies allows access to multiple and “sensitive” interpretations: the difficult interaction between the sexes, the ambiguity of family relationships, the conflict between pursuing a career and professional ethics, the links between the market, power and print media; the meaning of writing. Given that “there is no year zero”, writing a book becomes for the author “a way to expand the present, to escape the syntax of ‘before’ and ‘after’”.
The novel is pervaded by the sense of a delicate, sensual glance, which acutely touches strongly seductive chords. The painful, unjust end of a love leaves us breathless, as two characters are torn by the conflict between an irresistible physical and emotional attraction and their duty to a new social conduct.
A love scene is described in pages of great intensity, the erotic tension presented through an elegant balance of description and suggestion, in a game of words spoken and unspoken by the characters.
A truly precious and refined gift from the author.