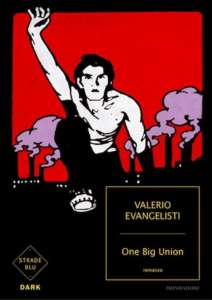 A tale in between/A link between Antracite (Anthracite) and Noi saremo tutto (We shall be everything), One Big Union talks about/deals with the fights of the American union IWW (Industrial Workers of the World) from 1877 to 1919. The narrator, the spy Robert ‘Bob’ Coates, is a mysterious man who only experienced real life when he pretended to be someone else, and who admits: ‘I am no one’ at the end of the novel.
Coates is not as ambitious as Eddie Florio in We shall be all, but he is a mediocre man. Supporter of the ideals of the entrepreneurial class, he is dumped by his instigators as soon as he stops being useful . However he does not realise that he is being exploited exactly as the workers against whom he writes report.
Coates is more a witness than a protagonist, a shadow amongst the shadows of both workers and day labourers constantly oppressed killed, and blackmailed.. They are the victims, whom he never identifies himself with and whom he fights against until his last breath. However, eventually He does not even succeed in his social climbing.
A mediocre man who is (always indirectly) responsible for executions and counter- -insurgencies. The interpretation of the novel precisely lies in the irrelevance of the protagonist, the same characteristic of those who only go against exploitees for personal interests, the real despicable dictators of History.
Valerio Evangelisti’s point of view is lucid and unmerciful, the story flows quickly and lightly until the end. Evangelisti’s writing style is personal but immediate and leads us into the last century. The author is able to let us experience the story firsthand, as if we were part of it at that moment: a journey through time and conscience.
Despite being fictionalised, History is the real protagonist of One Big Union, also thanks to Robert Coates’ blurred point of view. Therefore This novel is less engaging but more precise than the previous ones. And it is desperately similar to the cliff off of which we are more or less consciously jumping. Again.
A really worth reading Novel.

Russell Hoban – The Mouse and his child