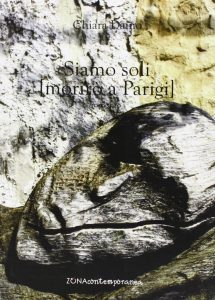 “We are alone” is a novel that delineates loneliness. Divided into five (dis)similar and uneven parts, it is full of authorial notes, through which the text becomes a hypertext, made of relationships, of badly requited eros, of misplaced love.

Philosophising as she moves between dazzling puns and continuous cross references, Chiara Daino proves to be a priestess of the poetic word, which she impresses on her prose, intensifying it with meanings and contradictions, double meanings and uniqueness [loneliness]. She never trivializes or settles for over-used forced reiterations: the word dances with its own meaning; it is an inexhaustible creator, darting between the meanings and feelings of the language, alighting on the  folds and plagues of loneliness with firm and merciless lucidity, sometimes compassionate and sometimes  sharp, within that dense magma of being [alone].
As magmatic as a rock symphony, as compact as a concept album, this work shines with stellar density, revealing itself to be a sepia-tinted compulsive novel: There is no thread when I write. Are you sure? Or do you give up? I am quite enjoying myself, but it’s red: it’s an open-heart  operation on the language. It’s without vetoes. It’s about the world , without veils.
It is a book to be read in one go, though it cannot be understood all at once, a fluid oxygen stream of words [thoughts, ideas, (un)explorable emotions], which arouse awareness and reminiscence. A text that some might consider indigestible and heavy: the readers will insult me, for the complicatedness; the establishment critics will demolish me: «rejected!»; some Poet will  write the final foot note. It’s about the specific weight of the hyper-meaning, which at times is deceptively meaningless: but only to those who do not look beyond the surface.
This is a glorious, playful, but not illusory, tangle of a novel which – if read in one breath – leaves you breathless; it is sublime in its exploration of profundities, and the reader is perfused by thought and thinking. It’s full of quotations, and built on foundations of a non-parasitic and non-fatal culture, from which the whole structure of the story rises, made of melodies and counter-melodies, of overlapping voices of conscience, (il)lustrating and never regressing. It is capable of crushing reality and reassembling it into consciousness, thanks to the use and the conscious reshuffle of references; it does not shirk from questioning its own writing and writing itself, giving pervasive answers to the point of forming a configuration of the soul (inevitably condemned to abandonment and therefore to loneliness). The key is not in the ending, but in the last footnote to the text: “The lesson [lectio difficilior] is: are we alone. You shine … I have burst.
Ingenious and apodictic, Daino’s text is not for just anyone but it is for everyone: because we are all alone.