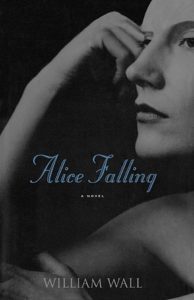 Alice cheats on her husband. Alice has sex with a much younger man, a student of philosophy who loves her quoting Kierkegaard and would even like she to go to live with him. Alice is a wealthy woman, wife of a powerful man. Maybe she is getting bored, her lady-like life with nothing to think of but a few parties and a few openings, and without anything to worry about except that the finances of her husband continue to be prosperous pushes her to seek adventures. But, suddenly, the slight breath of the asleep lover, only noise in the alcove after the clandestine intercourse, is replaced by the insistent sound of a horn, followed by shouted insults: this opens a small crack from which the reader can see what kind of life Alice is trying to escape by taking refuge in the arms of a young and sweet lover, because the impatient and rude driver, who does not stand to be even five minutes in the queue behind the milk truck is Paddy, Alice’s husband.

As well as impatient and rude Paddy is a sadistic, a violent and a manipulator who recognizes his victims with unerring instinct, an instinct that allows him to identify the people damaged by life, especially women, an instint that Paddy seems to have always had. Therefore, before marrying Alice, Paddy was engaged to Sheila, her older sister, who died in an car accident, and the two sisters have in common the same horrible secret, that of being raped still children by a priest, the same priest.

Very young and looking for redemption, Alice, even if doesn’t love him, is convinced that she has attracted Paddy up to get married because he lead she away from a life of abuse, but after years of a disastrous marriage made of submission and violence, she finally comes to understand that it was Paddy instead to choose her, because of her “smell” of victim, and because of the secret that makes her similar to her sister. All those that revolve around Paddy bring with themself the characteristic smell of victims. Even Nora, Sheila and Paddy’s companion of University, who is secretly in love with him and who offered herself as a comforter after Sheila’s death, taken as a lover and then left, again and again, even after his marriage to Alice, even after she she married Mick, and who, once permanently set aside, will sink into a hallucinatory depression, up to commit suicide with a drugs’ overdose. This smell brings also Sandy, the last mistress of Paddy, who he beats wildly and that he will end raping in front of Alice, triggering the events that led to the bloody conclusion of the novel.

Wall builds his characters with acute psychological expertise, from the young student of philosophy who with Alice discovers love with such intensity that, when he comes to believe that Alice is unable to love, think of abandoning his studies assuming that philosophy without hope of love is totally useless, to Mick Delany, Nora’s husband and in turn victim of Paddy, who, despite being all in all a good man, at the end will not be able to evade the recall of the smell of victim that Alice brings with herself.

Alice’s descent to hell, the fall into a lucid madness that in turn changes her in an executioner, the increasingly tight inner monologue that recreates for the reader her history of abused child, the continuous attempts to shake off the role of victim and taking over her life make her a character difficult to forget.
The second half of the novel can be difficult to deal with for the most sensitive readers, due to the exponential growth of violence, violence that is not groundless, however, which description is not unjustified: only through it is possible to understand the real state of moral and psychological disintegration of the characters.

Aside from the young student of philosophy, whose purity, however, fails with the growth of his desperate love for Alice, there is only one positive character throughout the novel, and is Billy, the owner of the art gallery around which play part of the events. Billy, who deals with great affection of Sandy when for the first time Paddy’s violence exceeds what is tolerable in a sado-masochistic relationship, is homosexual. About him Sandy tells Alice that she would like him to instead be heterosexual; Alice replies: “He’d be the only straight man in Ireland if he was.” The pun, difficult to translate in Italian, means that Billy is the only righteous man in the lives of the two women (straight is slang word for heterosexual, but in Italian translates as a word meaning “righteous” ).

Wall’s writing is terse, sometimes poetic, and his descriptions of characters and environments has a vivid quality; occasionally, however, the changes of scene and actors, although they are justified by the increasing overlap in Alice’s mind between Father Bennis, the priest who raped her as a child, and Paddy, are a bit too abrupt, and this can unsettle the reader.

Nevertheless, it is a novel that is really worth reading.