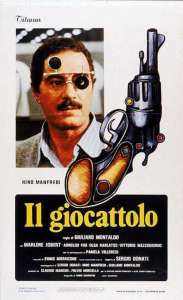 A Dangerous Toy is a film that suffers from the climate of insecurity typical of 1970s’ Italy. The narrative apparatus built by Donati is influenced by the best detective films, but it also contains elements of the higher quality filmmaking thanks to Montaldo and Manfredi’s sensitivity.
Echoing films such as Il cittadino si ribella (Street Law, 1974) by Castellari but, most of all, Un Borghese piccolo piccolo (An Average Little Man, 1977) by Monicelli and Cerami. Montaldo is not interested in the spectacular part of the story – although he does not neglect it – but rather in the analysis of a loser who finds his revenge in the possession of a weapon, a toy, which will turn out to be a rather costly business for him.

The plot revolves around a great Nino Manfredi (one of the screenwriters) in the role of Vittorio Barletta, a shady accountant who works for Nicola Griffo (Foà), a wealthy friend who exploits him and uses him to cover illegal business deals. Vittorio is married to Ada (Jobert), a loving but suffering wife, and leads a dark existence from which she finds solace by repairing and collecting watches.
The plot takes place in the dangerous city of Milan, among robberies and assaults. Vittorio gets hurt in a shooting at the supermarket; immediately after that, he meets policeman Sauro (Mezzogiorno) in a gym and they become friends. Unfortunately, Sauro is the one who gives the accountant the gun that will change his personality, after finding out that he possesses some really good sniper’s skills.
Sauro is murdered by a convicted man, Vittorio witnesses the scene, holds his weapon and kills a killer’s accomplice, getting into trouble and becoming a public figure. The accountant is persecuted by criminals, but when he holds his gun he feels different, faces three gangsters head-on, manages to distract them and cold-heartedly shoots them in the legs.
The boss’ daughter (Villoresi) seduces Vittorio – his wife (Karlatos) had previously and unsuccessfully tried to do the same – and eventually this will cost the accountant his job, when her father finds out.
There is a surprise ending, we find Vittorio at Ada’s deathbed, stopped by a shot fired by his wife before he can take to the streets and get back at those who have always offended and exploited him. “Wouldn’t it have been better if I had brought the cream puffs round that day instead of the gun?” a dying Vittorio mutters, with a sarcasm typical of the best Manfredi.

A film shot with cold photography, a real Italian noir, in the wake of the best films by Fernando Di Leo, more civilly and politically committed and more attentive to content than genre.
The scenes in the suburbs of Milan and the criminal underworld are extraordinary, and so are the parts concerning the shootings in the supermarket and at the restaurant. Excellent slow motions fade-outs, crucial moments narrated by framing the terror in the protagonist’s eyes, with slideshows and long shots that give the dark plot a touch of poetry.
Montaldo is more interested in his characters’ psychology than in the pure action scenes written by Donati. Manfredi puts in something of himself and brings to the role of accountant ability and sense of humor.
A loser, a naive middle-class man who understands that he has sniper’s skills and becomes a danger to himself and others. Montaldo shows Vittorio and Sauro’s friendship, the marriage crisis with suffering Ada – Jobert, who has worked in many French movies, is very good at acting out   unfulfilled dreams and unlikely cheatings just by thinking about them.

A Dangerous Toy is the story of one man’s everyday life who, little by little, falls into despair, losing everything, even his life, in some paradoxical way.
Among the actors, Arnoldo Foà is good at playing the cynical company’s boss, always fighting with his rebel and spoiled daughter, ready to exploit his friend for thankless tasks. The same goes for Mezzogiorno, an actor who has left us too early, who comes from B-rated movies and shows his adaptability to the roles that are assigned to him.
It is said that Manfredi and Montaldo had a discussion about the ending: the first would have preferred to see his anti-hero taking to the streets, shooting and finally being killed. The director, on the other hand, opts for an unexpected solution and has the accountant with a gun stopped by his wife, who kills him for love.
This ending subverts the thesis advocated by films such as Il cittadino si ribella that the only possible solution is to take justice into one’s own hands.

L’arma (Sniper, 1978) by Jerry Jameson and Pasquale Squitieri is another film which was also written with the intention of rebuilding the climate of general insecurity of that historical period, between common criminality and terrorism, street clashes and criminal gangs.
Within the general framework, we witness there is the everyday life of an ordinary man and his physical and psychological breakdown.
The exterior scenes were shot in Milan, even if Nicola Griffo’s mansion is Villa Parisi in Frascati.