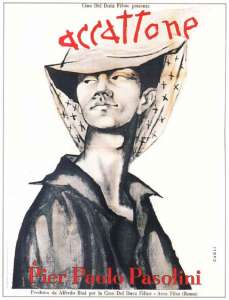 Ungrammatical cinematography was a definition that Pasolini himself gave to his cinema, nearer to painting, to Giotto’s and Masaccio’s fields of vision, and to mannerists such as Pontorno, rather than the modern idea of cinema. The background is the scene where the characters move, almost always foreground against foreground, but also among dollies and shots.

Accattone was born as a film made by non-professional actors, celebrating the extraordinary Franco Citti, in the role of his own life that he plays in a very spontaneous way; perfect for his expressiveness. Sergio Citti helps Pasolini in writing dialogues, using romanesco (roman dialect), that the writer coming from Friuli could not yet handle, even though he had been living in Rome since 1949, after running away from Friuli. The film pays a tribute to Alfredo Bini, who would produce other films directed by Pasolini, amongst controversies and absurd bans on showing the film in projection rooms.

It was thwarted even by Venice Festival, that actually accepted it, if only for competition. Folchi himself, Minister of show business, did not impose the film on young people under the age 18 (instead of 16), an absurd prohibition. Only with this limitation, he authorized the release of the film. In order to see Accattone on television, we had to wait until 1975, in a churchy and Christian Democratic Italy that the director defined as the “heir of fascist tradition”.

The plot can be condensed in a few lines, but it is not the most important thing, whereas more essential is the afflatus, and the sympathy that links Pasolini to the inhabitants of Roman working-class suburbs: a world made of petty thieves, little criminals, prostitutes and pimps. Accattone is an idle who lives in the suburb, cashing in off the prostitute Maddalena, though he says he loves her.

One day the woman is arrested, just after being raped by a band of Neapolitans, and is sentenced to five years’ imprisonment. Accattone takes a fancy to Stella; at the beginning, he thinks of making her walk the street like Maddalena, he seems to fall in love with her, but in the only way a guy like him can have feelings. Accattone even tries to work, but he cannot overcome the shock and the mockery of his idle friends who drink wine and spend their time at the coffee bar. In order to provide for his woman, he decides to make an improvement in criminal life and start off as a thief, but his first theft costs him his life in a car accident. “Now, I really feel good”, are the last words that he says to his companion of misfortune who brings help to him.

Accattone is a loser, a man who takes from life the little nothing that it offers, who lives by his wit, profiting from a woman. He takes a fancy to something, but passion lasts one second, then everything goes back as usual. Accattone also has a son from whom he steals a thin chain in order to make a gift to Stella, and he also has an ex-wife who does not want to see him anymore, because he can only be a kept man, and he is certainly not an ideal father for her son.

Nevertheless, Pasolini describes in a sharp and curt language, totally lacking in rhetoric, a marginal world crowded with people who don’t seem to be humans for their total lack of possible redemption. The cinematography style is essential, with a few camera movements, many foregrounds, short zooms, moments that seem to be taken from silent films and from the best Soviet cinema.

The sound track from Back, was revised by Rustichelli who adjusts La Passione secondo San Matteo( Passion according to San Matteo) as a symphonic background for the exploits of a little suburb criminal. The film was photographed in a frosty black and white by Tonino Delli Colli; Leopoldo Savona and Bernardo Bertolucci helped the poet in his first film direction; Nino Baragli made an edit with perfect timing, and Flavio Mogherini produced a realistic art direction.

Many critics said that Accattone is a film that has nothing to do with neo-realism. We agree to some extent, because the oneiric part where the main character dreams his death, his funeral, his burial under the sun, the Neapolitan criminals’ bodies slaughtered and buried under ruins, is fantastic and visionary. But it is also true that Pasolini’s camera follows “shadows”, (as Zavattini said), the main character, along the dusty roads of a Roman sunburnt summer, in the suburbs made of shacks, ruined houses and debris, as an evident inheritance from neo-realism. Accattone is a film that achieves the bandit’s poetics and this is what conformists did not like, because Pasolini does not judge, just like a real writer, but he tells a story of the real suburb life.

We are in Rome but we do not see a single beautiful thing of the capital, only high-rise buildings, blocks of flats and run-down shacks, because Pasolini is interested in the suburb and urban lumpenproletariat poetics. The first work of a director that makes us hope in spite of all the dispute, a work appreciated by the critics that had praised Ragazzi di Vita and Una Vita Violenta, a film that is a direct consequence of the work of fiction  by an author, who will be proudly out of line his whole life through.