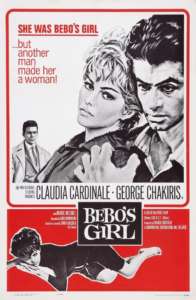 Luigi Comenicini shot one of his main movies without betraying the inner meaning of Carlo Cassola’s novel (Premio Strega in 1960), even if its plot is simplified for the screen. This movie is well scripted by Marcello Fondato.

The story takes place at the end of the Second World War, between 1944 and 1946: the liberation of Italy by the Allies, the referendum between the Monarchy and the Republic, the first years of normalization.

The character of Mara (Cardinale) is really true to the book: she is a nervous teenager aged sixteen, while Bube (Chakiris) is a nineteen-year-old partisan, as described by Cassola. They fall in love when Bube visits Mara’s father at their home. Bube kills a marshal during a partisan action and this murder causes him many troubles, and he is forced to emigrate. Thanks to the Communist Party, he escapes to Yugoslavia, but after the proclamation of the Republic, he is expatriated and stands trial. He gets a fourteen-year sentence. Mara understands she is his last hope and decides to wait for him. Mara is a typical Cassola woman, apparently weak, but actually a really strong, determined girl, who is the mainstay of the couple. She gives up a possible love story with Stefano (Michel)so as not to leave Bube to his fate, when everyone does, even the Party.
The set in Colline Pisane, Colle, San Donato, Volterra, Val d’Elsa and Saline railway station is excellent. The director and the art director have ably recreated a very realistic Italyas it was when just liberatedby the Allies.
It is a dramatic film tinged with neo-realism, the actors really get into their parts, especially Claudia Cardinale, who is amazing. She wins an Italian award, Nastro d’Argento, because her characterization of Mara is excellent. I think it satisfied even Cassola, who has created memorable female characters. Mara moves from being a little girl in love, spoilt and stubborn, to being a woman, who decides to sacrifices her life for a man. The skill of the director and the scriptwriter is giving a meaning and justifying the change caused by adulthood and events that change life.
Cassola talks about the partisan war, he doesn’t have moral opinions, but tells a story like many others of that sad time. “The fault is only of the war and the fascists. You can’t judge some things as if nothing had happened”, a character says. Bube: “All the fascists have to be killed!”. Mara doesn’t comment on that: she isn’t interested in politics, like aperfect Cassola woman, some things are for men, she waits, she suffers, she hopes and finally she sacrifices herself.
The final sequence at the Saline station, when she meets Stefano, who is married, after several years, is really touching. Mara has no regrets, because she has followed her heart.
The cinema quotes are really important, the crowded cinemas auditoriums reconstructed by the director while watching Robin Hood and Waterloo Bridge. Cinema and dancing are the only two amusements in a poor Italy after the war. The popular trattorie, the cafes with little food and drink and the little shops, which sell poor cheap things, are perfect.
Volterra and its countryside are immortalized in black and white by Gianni di Venanzo. The vintage music by Carlo Rustichelli is in tune with the script. A little masterpiece.
The character of Mara is inspired by the true story of Nada Giorgi, who died in May 2012 at the age of 85, who has never agreed with the reconstruction by Cassola. Massimo Biagioni tells her real story in his book Nada, la ragazza di Bube (Polistampa, Florence), who had been true to her husband all her life, fighting against Cassola’s fantasies to clear his reputation. Nada has always proclaimed Bube’s innocence (Renato Ciandri, not Arturo Cappellini) in that crime, as she had always denied having other love stories. These discrepancies occurwhen you want to fictionalize reality…

Critical anthology
Pino Farinotti gives three stars. Morando Morandini two and a half (three by the audience, and the returns come close to one billion lire): “A true version of Cassola’s novel. The representatives of extremism (Mara’s father, Bube’s fellows) are in the background, like in the novel, and like the historical background. Even if Claudia Cardinale doesn’t talk and walk like a Tuscan (Mario Soldati says), she isn’t dubbed in the end and is believable, tender and docile. The black and white film by Gianni di Venannzo (1920-1966) is beautiful”. Even Paolo Mareghetti gives two stars and a half: “Marcello Fondato adapts Cassola’s bestseller and Comenicini, after Everybody Go Home [Tutti a casa], once again analyses a turbulent time of Italian history. In those days the discussions caused by the novel fell on the film: the sentimental and intimist perspective seemed to belittle the still living myth of the Resistance. Anyway, Comenicini doesn’t cover ideology, but follows the growth and development of two simple souls with melodramatic hints, overcome by a bigger story than them. Claudia Cardinale, who isn’t dubbed, is really good. The photography by Gianni Di Venanzo is audacious”.

Fabrizio Colonna – Love in the Time of Football