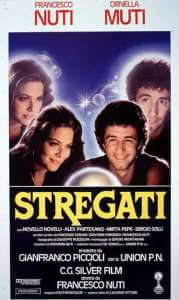 Stregati is the third film by director Francesco Nuti, after Casablanca, Casablanca (1985) and Tutta colpa del Paradiso (It’s all Heaven’s fault) (1985 ), starring Ornella Muti, which can be considered his best work. The story can easily be told in a few words. Lorenzo (Nuti ) is a dj who lives in the dockland area of Genoa, where he hosts a night time radio programme at Radio Strega. He lives for the day, along with his father (Novelli) – manager of a porn cinema – and two other pranksters friends (Alex and Remo 40), between jokes, light heartedness and easy women. He also has a mistress, Clara (Pepe), who breaks up the monotony of his life. The film Is a sort of a Genoese version of Amici miei (My friends) it tells the night time adventures of the four pranksters, however, as soon as the beautiful Anna (Muti) appears, the film becomes a romantic comedy. Lorenzo meets Anna on a rainy night, While driving his friend Remo’s cab: they end up sleeping together and he feels attracted to her in a way he has never felt before.. The problem is that Anna is going to be married the next day, she has her white wedding dress in a suitcase and a train is waiting for her at the station to take her to Verona. The two begin an intense relationship, Anna misses the train twice, makes love to Lorenzo once more, but in the end she is bound toward her destiny. There is a surprise ending. After a few days Anna is back, on a rainy night, because she decided to stay with Lorenzo and share his bizarre and incoherent life.
Stregati (Bewitched) had to be called Strega (Witch), according to rumours, the very same screenwriter, Vincenzo Cerami, said that the movie took an unexpected turn. The two main actors actually fell in love on set, which meant that the film became a romantic comedy. The film’s plot is less solid and engineered than the previous Tutta colpa del Paradiso, but it’s redeemed by its intense Genoese night photography ( Ruzzolini ) and a poignant and evocative soundtrack (Giovanni Nuti). The film was awarded: Silver Ribbon for Best soundtrack, nominations for the David di Donatello for Best Original Song (Rose), four ‘Ciak’ Gold nominations (best film, actor, actress and photography). The location is very accurate: Genoa is deserted at night and rather amazing, the docks, the central areas, the station (although it is Florence’s Station), The film is shot in the pouring rain, taking glimpses of intense sunrises and suggestive marine sunsets. Many images from the film remain unforgettable: Ornella Muti wearing the wedding dress, a beautiful shot of Nuti with Genoa’s view behind him, intense close-ups of the beautiful actress and glimpses of the deserted city, in a surreal night. The joke played by Nuti on his father while he is cleaning the room of the porn cinema is comical horror level and with a good crescendo in terms of tension. The sentimental part is not boring, even though some shots are too diluted and the sex scenes are a bit repetitive. Nevertheless, the film has a good screenplay, the dialogue is excellent, the soundtrack is good, the photography is rather intense and the acting is never over the top. Francesco Nuti was promoted to director with flying colours, because of his ability to handle the camera. Ornella Muti is a beautiful and sensual actress, whose presence alone makes the set shine and whose eyes radiate a ‘special light’. Some are wondering whether that light is an expression of her much talked about love for Nuti.

Paolo Mereghetti (one star): “In his second film, he turnes out to be more an author than a director. He recites quotes like those one finds wrapped around the Baci chocolates, and looks for the most poetic features of the city at night, which reminds one of Visconti’s ‘Le Notti Bianche’. What annoys one the most is neither Nuti’s ambitious plan to turn this film into something more than a comedy nor the weakness of the plot, but rather Nuti’s narcissism. Nuti the director seems to contemplate and admire Nuti the actor, while assuming that the viewer should agree with him.” I would rather ignore this false and mean review, which is unecessarily spiteful and light years away from the film. (Not to mention the fact that Merenghetti wrongly refers to this film as Nuti’s second, when it is actually his third one).
Morando Morandini (two stars from the critics, three stars from the audience): “Heartbreaking and a bit stupid on the background of a wintery Genoa as beautifully suggested; it is a tribute to Cinema and Night. There is some disconnection, an unlikely happy ending I completely share his views aside from describing the flm as ‘stupid’. Gives it two stars but does not provide his reasons for it. In our opinion, the film is worth three stars, the only flaw lies in the fragmentation and in some shots which are too diluted.

One must say a few words about Francesco Nuti ( Prato, 1955). Although in order to learn more about the unfortunate actor-director we recommend the wonderful book edited by Matteo Norcini and Stefano Bucci “Francesco Nuti – La vera storia di un grande talento (The true story of a great talent, Ibiskos, 2009). This book avenges too many injustices and criticisms made against him. Nuti started his career as an actor in the comic trio I Giancattivi, created by Alessandro Benvenuti and Athina Cenci. His first starring role is in the surreal A Ovest di Paperino (To the West of Donald Duck, 1982), directed by Benvenuti. After the experience of cabaret and television with the group, Nuti began his solo career and starred in a number of comedies written by Maurizio Ponzi, which were hugely successful among young people but were torn to pieces by the critics. Among his first appearances, Madonna che silenzio c’è stasera (Holy Mary What a Silent Night, 1982), Io, Chiara e lo Scuro (I, Clare and the Dark, 1983), Son contento (I’m Happy, 1984). Nuti made his directorial debut in 1985 with Casablanca, Casablanca, and, despite the critics’ negative reviews, continued to be very successful with Tutta colpa del Paradiso (It’s All Paradise’s Fault,1985), Stregati (Bewitched, 1986), Caruso Paskoski di padre polacco (Caruso Paskoski of Polish father,1988), Willy Signori e vengo da lontano (I’m Willy Signori and I Come from Far Away, 1989), Donne con le gonne (Women in Skirts,1991). The blatant failure came with Occhio Pinocchio (1994) which was completely misunderstood by the viewers, and continued with Mr. Quindicipalle (1998), which starred Sabrina Ferilli. The situation worsened furthermore with Io amo Andrea (I Love Andrea, 2000) and Caruso Zero in condotta (Caruso, Zero for Misbehaving, 2001). The last two films were actually produced by Nuti himself, who had to face that times had changed and the reality of Italian cinema was increasingly difficult to break through. His attempt to Revive a particular 80s’ movies genre is unsuccessful. His last cinematographic attempt as an actor was in the thriller Concorso di colpa (Contributory Negligence, 2005) by Claudio Fragasso, which a few have seen. Nuti did not give in, despite serious health problems from which only few people have actually seen, and announced plans for a new film: Olga e i fratellastri Billi (Olga and Billi brothers-in-law), with Sabrina Ferilli and Isabella Ferrari, which all came down to nothing in the end. On September 3rd 2006 he fell into a coma due to a brain hemorrhage following an accident at home, was hospitalized, and after undergoing surgery began a process of rehabilitation. Francesco Nuti made some recovery, but is turned into a shadow of himself; consequently, the Tv used this opportunity to display idiocy and insensitivity when covering Nuti’s story. Fortunately, his brother Giovanni and his former life partner Annamaria Malipiero (mother of his daughter Ginevra) lovingly took care of him. Matteo Norcini did justice to Nuti by publishing a monumental book, a must read in order to understand the path followed by the great Tuscan artist. While Nuti began to write poetry, Giovanni Veronesi began working on a project aimed at introducing the best films of Nuti to the public. In 2009, the National Film Archive dedicated a retrospective to the director from Prato. A documentary was also released: Francesco Nuti… e vengo da lontano (Francesco Nuti… and I come from far away) (2010), presented at the Rome Film Festival. The music video Olga tu mi fai morir (Olga you make me die) (2013), features his last ever work, a song written with his brother Giovanni. Nuti was also a successful singer (Puppe a pera, Sarà per te…) and had taken part in some editions of the The Sanremo Italian Song Festival. The critic Roberto Pioppi could produce some rather constructive comments, which went way beyond Mereghetti’s nonsense: “Nuti’s comedies are far from light entertainment, they are thought through. They highlight his skills as an actor and director who is inclined towards comic melancholy, romantic and surreal at the same time, yet ready to perceive some aspect of modern Italian society…” We grieve over the fact that now Nuti is silent, suffering, unable to communicate his inner thoughts. It saddens us because we are 80s’ youths, who spent many happy and carefree moments in his company. I remember being in love for the first time while watching Tutta colpa del Paradiso. Thank you Francesco.