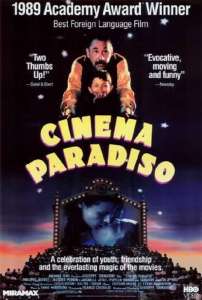 Talking nowadays about Cinema Paradiso seems rather useless given that everyone has talked about it, after the Award from the Cannes jury, the Golden Globe and the Academy award in 1990 as Best Foreign Film. Not everyone knows though, that the original version of the film came out in 1998 it lasted 173’ and was not successful amongst audience and critics alike.  The only cinema of the peninsula that kept showing it was the Aurora in Messina, thanks to manager Giovanni Parlagreco, producing a positive response among the audience in the whole of Sicily. The international version,the one that we all know, was cut to 123’, it was a winning strategy, making the film becoming more smooth-flowing by removing some bombastic and even useless scenes. Cinema Paradiso is a very autobiographical film,from the imaginary little town Giancaldo (the name of the mountain over Bagheria) that reminds of his  native homeland, to Alfredo’s character inspired by the photographer Mimmo Pintacuda, Tornatore’s friend and a real cinema master.

The story is was shot in Sicily, from Bagheria to Cafalù, up to Castelbuono e Lascari, Termini Inerese with the cinema theatre built (and later dismantled) in the square where Adriano Palace is. The plot is so well known that telling it would be useless: Salvatore is a successful director, he lives in Rome and had left Sicily thirty years before. One day he receives news from his mother that his friend Alfredo, camera operator of Cinema Paradiso, died. There starts a long flashback based on Salvatore’s childhood memories and on the friendship with Alfredo, the first one who transmitted the passion for cinema to him.

The film is a real story of cinema through images, it shows clips of unforgettable works such as La Terra trema, Ulysses, The Blue Angel, Gone with the Wind, Stagecoach, Riso amaro [Bitter Rice]… We can also appreciate the evolution of audience’s taste: silent comics, tearjerker operas, seaside comedy, and Poveri ma Belli like, up to Toto’s great success and to the first type of erotic cinema. Not only do we see the national habits change, but also the love for cinema in the first years after the war and in the fifties, up to the crisis of the eighties because of VHS and television. Tornatore tells a story which takes place in the years after the Second World War in a small Sicilian town: a mother’s despair for being left alone after her husband’s death in the war and the cultural development of a young boy in contact with the first cinematographic images. Alfredo is the deus ex machina in Salvatore’s life and continues to be so also after the fire that destroyed the cinema and made Alfredo blind. Cinema Paradiso was eventually rebuilt by a Neapolitan entrepreneur and Salvatore became the camera operator: there were are no more priests to censor the movies as the cinema became free of the parish church’s control. Tornatore tells the story of Salvatore’s love for Elena, the only love of his life, a woman lost in the maze of existence; one day she leaves the small village and she disappears. ‘It’s fate’ says Alfredo and suggests that he escapes from that country, so that things don’t swallow him, to live for his dreams but far from that place where there are only ghosts. Salvatore accepts the suggestion, he goes back home only thirty years later, for his friend’s funeral, just in time to cry with his old fellow citizens just as Cinema Paradiso is destroyed in order to make way for a new parking lot, as decided by the council.  A last gift from Alfredo to Salvatore also awaits him: a reel containing all the sequences of the kisses that the parish priest had cut out of the movies thirty years earlier.

We can certainly say that this is a masterpiece, filmed with a first class technique, starting from the initial sequence plan that introduces us to the story, up to a sand-coloured photograph that reconstructs the atmosphere of Sicily in the fifties. The performances are excellent, especially young Salvatore Cascio’s (a promising talent which we saw again in cinema and television, and Philippe Noiret’s, an unforgettable duo, both strong characters within the screenplay. Among other supporting actors who come from the so-called ‘second rate’ Italian cinema: Leopoldo Trieste is a credible parish priest, Leo Gullotta a perfect sacristan, Tano Cimarosa characterizes a man of the people with simple tastes and rough manners, Nino Terzo is the Sicilian who abandons his homeland to look for a work in Germany. Cinema Paradiso is a film that never gets old and that we can always watch with a tear of emotion, full of contents that speak of friendship, filial love, dreams to carry on, roots to be cut but which are never lost to the end. This is a film that can be watched indefinitely. And as far as I am concerned, I’d see it again tomorrow.