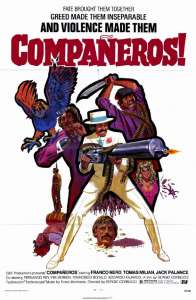 Compañeros [Vamos a matar companeros (Let’s go killing, mates)] is a revolutionary tortilla-western directed by Sergio Corbucci, considered a specialist in this genre after the success of Django (1966) played by Franco Nero. The production is Italian and Spanish thanks also to the kind cooperation of the Germans starring Tomas Milian, Franco Nero, Fernando Rey, Jack Palance, Francisco Bodalo, Iris Berben, Karin Schubert and Eduardo Fajardo. The action is set in the revolutionary Mexico torn between Mongo’s (Bodalo) followers and those of the idealist Xantos (Rey), prisoner of the Americans. Two characters are linked in this plot: Yod, a mercenary gunrunner called The Swedish (Nero) and El Vasco (Milian), one of General Mongo’s men; their mission is to set Professor Xantos free. The mission’s initial purpose is not very noble as the two men want to get their hands on the combination of a safe that may contain a considerable treasure; in the end, however, they convince themselves of the goodness of the revolutionary cause.