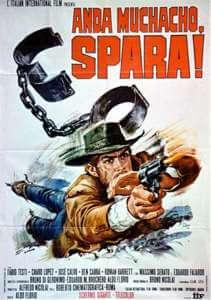 Aldo Florio is not a director specialized in western movies, he doesn’t shoot memorable films, neither does he dramatize masterpieces (among his best works, two post-atomic films by Joe D’Amato, Crime against Crime and Five for Revenge). Dead Men Ride, whilst remaining a copycat of Sergio Leone’s western movies, – inspired by A fistful of Dollars, from which he copies whole sequences – is his best work, well received by the Italian and the Spanish critics as well as by the general public.

In his monumental as well as indispensable History of Italian Western, now at its third volume, Matteo Mancini is the least enthusiastic reviewer, precisely because, as a true expert in the genre, notices his spirit of emulation and many sequences which are shamelessly copied.

In short the story, which follows similar western works: Fabio Testi is the gunman Roy Greenford, who is escaping from a penal colony with Emiliano (Serato), a Mexican rebel who dies during the escape. Roy gets to Emiliano’s village, where the terrible Redfield (Fajardo) bosses around, supported by Lawrence (Carrà) and Newman (Barrett). Roy’s task is to set the village of miners and gold diggers free from the despotic masters; in the meantime, he falls in love – between a duel and another – with the beautiful Jessica (Lopez), who shows herself topless in a fleeting erotic sequence. In the end, justice triumphs and the miners understand that they have to learn to protect themselves against their exploiters.

Dead Men Ride opens in Italy in 1971 and in Spain in 1972, also known as “Il sole sotto la terra” in Italian and “El Sol bajo la Tierra” in Spanish (literal English translation: “The Sun Under the Ground”).

We remember it for the excellent Morricone-like soundtrack composed by Bruno Nicolai.

Strong points of the film: the actors really got into their characters, Fabio Testi, above all, initially playing a man harassed and beaten by the bad guys, then a merciless avenger; Eduardo Fajardo plays his typical role of the bad guy very well, in this case an impotent voyeur.

Charo Lopez is a Spanish sexy actress who has an erotic-adventurous role, as the keystone of the story: she is the responsible for the gunman’s escape and doesn’t hesitate to have sex with a guard in order to save him. José Calvo is a convincing Mexican old man, Luciano Pigozzi a great character actor and Massimo Serato good as his usual in the role of the unlucky friend.

The Mexican setting is rendered by hot and caliente Spain, properly concealed by a perfectly-built village. The scenery is flawless. The photography gives all the genre’s suggestions. The screenplay has no holes and it’s fast and exciting. Direction is good with very close-ups of the eyes, widely used zoom and attention to details, framed by a skilled eye. Not too many flaws, but we just agree with Mancini’s dismay for too many stories taken from A Fistful of Dollars, even some of the gunman’s quirks and his Clint Eastwood-style clothing. Aldo Florio won’t do any better, however. To see again.