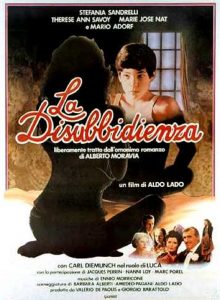 Aldo Lado sets the story in Venice and narrates the inner drama of Luca (Diemunch), a young boy in conflict with his father (Adorf), a bourgeois fascist, and with his mother (Nat), a singer who makes use of the Germans to hit the big time in the world of opera. Luca becomes a partisan and it is only thanks to him that his family manages to avoid communist persecution during the postwar period. The young man becomes intensely disillusioned by the events after the Liberation. “I didn’t go to war for things to be exactly like they were before”, he declares, realizing that his friends believe in the myth of America and will not do anything to change the world. By contrast, his father’s nostalgia increases: “We were all fascists and now there isn’t even one left”, he says. Luca’s disappointment regarding a failed revolution is so great that he searches out self-destruction, and refuses to be nursed when he contracts pneumonia. Sex is the solution to everything, is the message deduced from Moravia’s novel, and it is represented here by the two female figures, the symbols of Luca’s sentimental education: Therese Ann Savoy and Stefania Sandrelli give life to two intense characters who manage to lead the young man back on track.
Stefania Sandrelli is a nurse in love, while Anne Savoy is a Jewish servant who lusts with erotic artfulness after the young man. The movie is the story of a sexual initiation, a novel of an education sentimentale. Sex is the only way to escape from the void that surrounds us: this would seem to be the message that the director and the scriptwriters want to convey. Only love gives relevance to life, not variable and fleeting ideologies.
An extraordinary character is the fascist teacher played by Nanni Loy: “Politics is that thing which, whether we have it or not, leaves everything as it is.”
Mario Adorf has acted better on other occasions but his character does not lend itself to development, being a bourgeois with reactionary sympathies. Marie-Josè Nati in the role of the wife and singer of the Regime, identifies well with her character; her acting is meticulous but not outstanding. Karl Diemunch is capable in the role of the adolescent. Marc Porel is not bad at all, and a guarantee to a French audience. Savoy and Sandrelli are provocative and vie for the title of sexiest actress, even if the latter is more at ease, in a role that is half mischievous, half dramatic.
Ennio Morricone’s mellow and romantic score is excellent, as is Dante Spinotti’s misty and suffused photography of Venice, including some remarkable sunsets on the lagoon and sequences on a boat going out toward the islands. The editing by Alberto Galliti, however, is controlled and slow, and not in tune with the film.
The entire second half of the film is taken up with erotica, even though the movie starts out in a dramatic vein and attempts to take a social and political stance.
At a certain point Lando seems to lose the thread of his plot and concentrates on various steamy scenes during which Savoy and the young Diemunch flirt behind flimsy curtains. Hide-and-seek and blindman’s bluff are two playful stratagems to immortalize suggestive erotic scenes, accompanied by a mellow soundtrack; however, they go on far too long.
Tinto Brass would later use Stefania Sandrelli in an even more erotic role in the movie “The Key”, probably inspired by this Lado movie that – just like his own – benefits from an effective Venetian backdrop.
Disobedience is a dark Malizia (Malice), directed as an erotic crescendo, with very little suspense and no dramatic turn of events, but will definitely appeal to lovers of soft porn.
In common with the short novel by Moravia, it deals with the themes of disobedience towards paternal authority, rebellion, and the discovery of sex as an essential moment in human development. “You have never deserved my obedience!” the son says to the father with contempt.
The last sequence immortalizes the 2nd of June 1946: the radio announces the referendum to choose between a monarchy or a republic.
Moravia’s novel is set in Rome, in 1919. Lado, instead, opts for Venice from 1944 to 1946.